For the past five years, he has been president of the Leon’s Furniture division of the company. He was the first non-member of the Leon family to hold the post and came to the retailer after a lengthy career at Canadian Tire Corporation where he ended his tenure as vice president of national store operations and support.

Edward Leon will continue as LFL’s chief executive officer, the role he has held since October 2018. He is also a member of LFL’s board of directors. 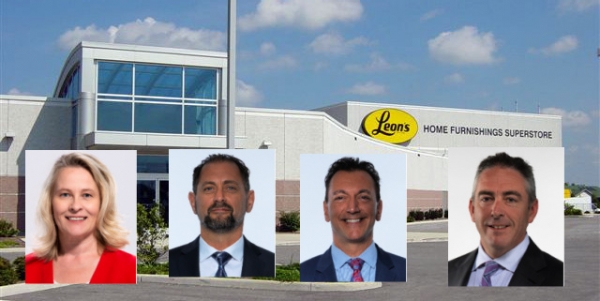 Succeeding Walsh as president of the Leon’s Furniture division will be Graeme Leon. The 40-year veteran of the publicly held but largely family managed retailer has served as the division’s vice president of merchandising for the past five years. Before that, he was the division’s national store operations manager.

Darci Walker has been named vice president of operations for The Brick. In a statement, LFL said Walker brings 38 years of experience across several operational functions at The Brick to her new role. Most recently, she served as senior director of distribution, where she was instrumental in developing a shared services model for distribution in Delta, British Columbia. Her appointment was effective on September 1, 2020.

“LFL has always maintained a commitment to the long-term development of its associates and to providing consistently challenging opportunities for everyone within the Company, and so it is always a pleasure to announce the progression of hard working professionals to senior management positions within the Company,” LFL chief executive officer Edward Leon said.

“Each of the individuals here has made a substantial contribution to the operating and financial results that LFL has generated over the past several years, by ensuring that our product strategy and distribution networks work together to ensure an unparalleled experience for our valued customers, coast-to-coast,” he continued, adding, “I am confident that LFL has one of the best and most seasoned teams in Canadian retail, with a tremendous level of knowledge, leadership and expertise that will continue to translate into great customer experiences and solid shareholder returns, for many years to come.”