VICTORIA, British Columbia – Gordy Dodd, independent furniture retailer, philanthropist and star of his own local television commercials, has been awarded the 2019 Lifetime Achievement Award by The Greater Victoria Chamber of Commerce. Dodd was feted at gala held by the chamber here a few weeks ago.

“Gordy’s story deserves to be told. Anyone who has spent time in our city knows who Gordy is, has seen him on TV and recognized his talent for promotion,” Al Hasham, chairman pf the chamber’s board of governors, said in a statement announcing his selection. “But there’s so much more to Gordy. He cares so much about his community and has taken action to improve the lives of many, many people.” 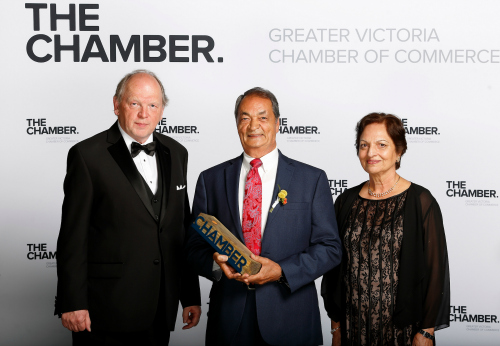 Dodd started with a small furniture store in downtown Victoria in 1977. Today, today Dodd’s Furniture and Mattress is the largest independent furniture retailer on Vancouver Island. In 1998, Dodd began the tradition of hosting an annual Thanksgiving dinner for people in need as a way to give back to the community. The dinners are held twice each year – at Thanksgiving and Christmas – and are held in Victoria, Nanaimo and Campbell River, each of the cities that are also home to a Dodd’s store. Last year, more than 4,000 people were able to enjoy a festive meal thanks to Dodd and his team.

Dodd says he hopes his efforts inspire others to be grateful for having an opportunity to live a good life, and the chance to make a positive difference.

“Really, there are not too many homeless. We can solve this,” Dodd believes. “I just want people to (think about the fact) we live in a rich country, and most people are doing pretty good. If we all just do a little bit we can solve a lot of problems.”

This isn’t the first time Dodd has received accolades for his work helping the community. In 2014, Christy Clark, then premier of British Columbia, presented him with the Queen’s Diamond Jubilee Medal. He is also the recipient of the Rotary Community Leadership Award, presented by the international service club in collaboration with the University of Victoria.

Although now semi-retired from the store’s day-to-day operation, Gordy Dodd is still active in the community and will lead the retailer’s team at the tenth annual Peace Walk to be held in Victoria’s Beacon Hill Park this August. Dodd was profiled in the Spring 2014 edition of the HGO Merchandiser.

Related Story: The Wizard of Dodd