Those of us who have spent more than a few days working in this country’s furniture and mattress industry are more than familiar with the great retail disruptor of the past decade – the online mattress store, now more commonly referred to as the direct-to-consumer (DTC) model. The common thread shared by these Johnnie-Come-Lately’s of sleep merchandising has been their reliance on a single product, the bed-in-a-box.

Over the past decade or so, it seems every mattress manufacturer in North America has been scrambling to add their own bed-in-a-box to their product line-up. In fact, at the recent winter edition of the Las Vegas Market one of the last remaining holdouts among the Top 15 mattress makers in the United States finally joined the fray.

Viewing all the marketing initiatives they’ve generated over the past few years; the consumer could be forgiven for believing the technology used to produce the bed-in-a-box – which is might be more properly called a rolled mattress – is relatively new, a product of the 21st century. After all, many people see it has the greatest technological leap forward since the introduction of the pocket coil just over 100 years ago. 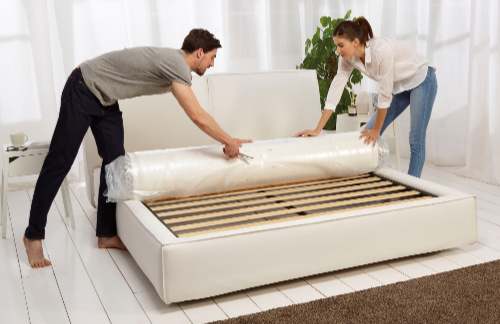 But the first truly compressed, vacuum-packed mattress was introduced to the industry in 1986 by Giuliani Magni, the founder of Magniflex, an Italian producer of specialty foam mattresses based in Prato, a city just north of Florence in the heart of Tuscany.

According to Richard Landriault, director of sales for Magniflex Canada, the technology used to produce compressed, or as he prefers vacuum-packed, mattresses offer several often-overlooked advantages to both retailers and consumers. Among them are the delivered mattress is more environmentally friendly; it’s more hygienic; and more cost effective to transport from the factory to warehouse and/or the consumer’s home.

He also believes many retailers have been misinformed about the technology and so don’t understand its advantages while sometimes tending to give its disadvantages greater weight than they deserve.

First off, the better quality compressed, or vacuum-packaged mattresses are made with quality foams and he points out innerspring and pocket coils aren’t compatible with the process.

“Foam is also a lot more eco-friendly,” Landriault told Home Goods Online, “especially the foam Magniflex uses, which is certified by OEKO-TEX (a leading testing organisation based in Germany) and doesn’t contain formaldehyde or any other toxic chemical. There’s no off-gassing or foul odours that are harmful to either the consumer or the environment. The foams used in many entry level or lower-end mattresses wouldn’t pass the OEKO-TEX certification process.”

In addition to using the best quality foams available, Landriault also said the company uses the most energy efficient methods and machinery to manufacture the two million or so mattresses its ships to retailers and consumers each year – that’s about one finished mattress every three seconds. Each mattress is also made with about the same amount of electricity needed to bake a cake.

Click here to read the rest of Michael’s report on Understanding the Compressed Mattress.