The need to aim higher

Whatever business you’re in, mediocrity is no longer an option! Let’s face it; if we’re trying to stay in business by being mediocre, once our customers have been to Disney World, we’re doomed. Once they’ve seen “amazing” and been treated wonderfully, we can’t fool them anymore.

Way too many businesses are just trying to get by. They aim to do just a bit better than last year – and if they do, they’re thrilled. They’ve lost their passion, they have no commitment to excellence and they have no vision as to what an extraordinary future could look like.

One client recently admitted to me that he and his business had developed a high tolerance for mediocrity and it was killing them. We need to aim higher.

I’m old enough to remember when TV sets had dozens of tubes inside instead of transistors, resistors and all that other new-fangled stuff. The tubes were big and cumbersome, they were tucked way inside under the massive picture tube and they burned out frequently. We had two TV’s back then and the repairman was at our house a lot.

It usually took an hour for him to reach in under the picture tube and wiggle out one tube after another to see which one had burned out. Then, blindly reaching in to put those six-pronged tubes back into their sockets was a further exercise in time-wasting frustration.

To solve this problem, Motorola – one of the market leaders at the time – came up with a design innovation they believed would assure them of market domination for years to come.  They put all of those tubes and the base into which they fit into a glide-out drawer that made their TV sets easier to repair. They even came up with a catchy name for this amazing innovation. They called it Motorola…works in a drawer.

The only problem was, they didn’t aim high enough. While they were busy creating TVs that were easier to repair, Japanese manufacturers started flooding the market with TV’s – made with transistors – that never needed to be repaired at all. Motorola was doomed! 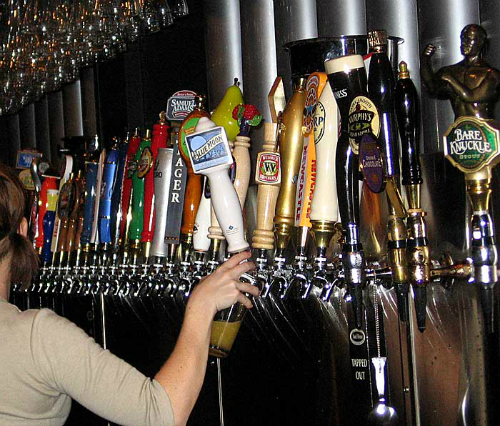 Stop playing it safe; stand out. Aim higher. Be famous for something! The very successful Yard House restaurants in the U.S. are famous for offering the world’s largest selection of draft beers. They have over 150 selections listed on their web site, including a gluten-free beer for people with wheat allergies. Beer-lovers flock to the Yard House for an extraordinary beer experience.

They even offer beer floats…beer with vanilla ice cream. Now, that one makes me gag, but the point is they’re doing some slightly bizarre stuff that makes them stand out and get talked about, texted about and tweeted about. It makes them famous. Have you given your target customers something to talk about, text about and tweet about? That’s what drives business growth today.

It has been said the world-famous Canadian architect Arthur Erickson never built a building that didn’t leak somewhere. But he was always pushing the envelope, always creating extraordinary structures and, in the process he made a few mistakes. His buildings are spectacular; they uplift, inspire and make emotional connections with people.

If you build ordinary, boring square boxes that look ugly and destroy the soul, they probably won’t leak but they’ll damage us in other ways. They’ll damage our soul. We lived in an Arthur Erickson-designed condominium building for several years and it did leak here and there. But every day, it uplifted us and enriched our lives. So, when you go for extraordinary, you may mess up a bit…but people will still love you for making a difference.

As an award-winning fashion retailer I offered massage chairs for husbands, a pirate ship play area for kids, free diapers for young mothers, free beverages for everybody, an invitation to “Please take as many items in the change room as you wish”.  We were the only retailers in the world doing any of this stuff and it was a heck of a lot of work to pull it off, day in and day out. But women drove up to three hours to shop in our store. They loved us and our sales were three times the national average.

Is it more work to offer 150 kinds of beer, to design buildings that uplift and inspire, to build a pirate ship play area, or to do what you do at a whole new level of amazing? Of course it is. Is it worth it? You be the judge. All I know is that in this highly competitive world where there are way too many other people selling what you’re selling, mediocrity is no longer an option.

So, what would extraordinary look like in your business? What has never been done before? What would truly amaze and delight your target customers and what will you commit to do to become that? What will you do this year to aim higher in design and innovation; in marketing, customer care and branding; in creating world-class efficiency and in managing your team? What will you do to set high standards of performance, appearance and behavior in every part of your business and then to create a culture of commitment and accountability? Or, will you be doomed by not aiming high enough?