Home / Article: The heat is on: Canadians gear up for summer in Las Vegas

The heat is on: Canadians gear up for summer in Las Vegas

Although the COVID-19 pandemic continues to rage on around the world, effective vaccines and antivirals have allowed most countries to return to some semblance of normalcy. This has prompted many big-ticket home goods retailers, manufacturers and distributors to get back into the swing of things by attending trade events both in and outside of Canada.

And now, with the Summer 2022 edition of the Las Vegas Market (LVM) fast approaching, many are preparing for a few days of networking, selling and reconnecting with old and new customers.

“We have a lot more staff attending this year,” Jade Merriman, vice-president of LH Imports, recently told Home Goods Online. The Burnaby, British Columbia-based furniture and home décor importer/distributor is sending roughly 20 sales representatives as well as a number of in-house staff members to man its showroom (C485) in the World Market Center, whose campus has housed the event for some 15 years now. 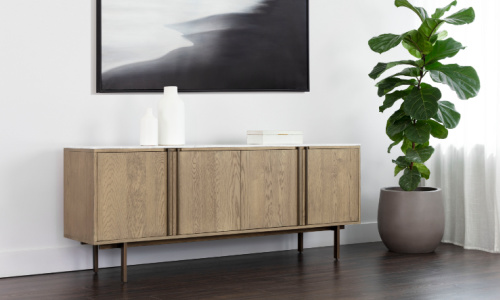 “We expect [the market] to be busier. During the pandemic, there were times we didn’t send staff because of safety measures, but we also didn’t know how busy the shows would be, so it didn’t make sense to send everyone. Lucky for us, the shows were stronger than our expectations,” she added.

According to International Market Centers (IMC), which owns and operates both LVM and the World Market Center, the summer trade event is expected to showcase more than 4,000 product lines and over one million actual products over its five-day run, which begins on July 24.

That said, Merriman acknowledges LVM’s summer edition is generally less busy than winter version, which is traditionally held at the end of January each year. (The Winter 2023 edition begins on January 29, 2023.)

“We do think it’ll be pre-pandemic levels but summer shows are generally not as busy as winter shows, but we’re hearing from our Canadian customers, mostly from western and mid-Canada, that they're raring to go to market. Many of our customers wanted to go to the last one but there was a COVID wave,” Merriman said.

“The January show was very good for us on the American side. We know we could be impacted by people who have not updated their passports or by people who will still need to quarantine if they’re not fully vaccinated, but overall, we’re hearing decent enthusiasm,” she continued, adding, “I think we’re going to be close to 100 per cent pre-pandemic attendance because more people are wanting to go out and travel and they haven’t been to a show in a while.”

Others agree the event will boast a number of Canadian attendees – particularly from the western provinces and B.C.

“We’ve been talking to a lot of customers in western Canada and we’ve seen more interest in B.C. and Alberta and some from the prairies, but not from Ontario and Quebec,” observed Carl Lovett, vice-president of sales for Sunpan, the Toronto-headquartered designer, manufacturer and wholesaler of contemporary furnishings for both commercial and residential use.