Home / Article: The Merchandiser is out!

The Merchandiser is out!

BRIGHTON, Ontario – In this, the Autumn 2022 issue of the HGO Merchandiser, we profile and talk with Scott Reid, who is beginning to emerge has one of the most influential independent furniture, mattress and appliance retailers in the country. He’s a relatively young guy, but he packs four decades of experience owning and managing his family’s retail operation in Thunder Bay.

I freely admit while we’ve been acquaintances for many years, only in the past while have I come to realize he is someone other retailers should be listening to – he has something very worthwhile to say, it’s well-reasoned and clearly articulated. It is also obvious Scott cares and thinks deeply about his business. That depth of concern extends to the current and future potential state of all independent furniture, mattress and appliance retailers. 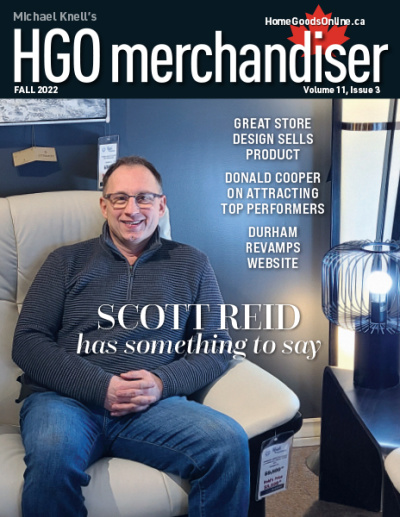 The owner of Reid’s Furniture is also critical of many of the vendors he does business with and organizations he belongs to. It is based on his knowledge and experience and meets the true meaning of the concept. Far too often these days, many confuse criticism with the rabid, usually highly partisan insults hurled by person at another usually over social media. True criticism is based on facts and experience – in the vernacular, it comes from a good place.

Scott Reid has something to say. I think he’s worth listening to and, at the very least, his arguments give everyone in our business something to think about.

For a change of pace, we also visit with Carole Vallières, the long-time director of commercial design for Mega Group. When people in this industry talk about design, they are usually referring to product design – be it a bedroom suite, an upholstery group or a laundry pair. We don’t often talk about the design of the cube where it will be displayed and then sold to the consumer.

Carole vehemently believes a well-designed store interior is a critical element to a retailer’s growth in sales and profits. It’s also a far more complex process than selecting pretty colours for the four walls the customer walks through. She believes, properly executed, the design creates what she describes as “the myth of the store.”

Boiled down to its essence, Carole believes a well-designed store interior is a great sales tool, one that adds top line numbers to the average ticket while giving higher gross margins. She provides great rationale for starting that store renovation you’ve been thinking about.

Technology is becoming increasingly commonplace among furniture manufacturers, partly in response to the impact e-commerce has had on the consumer and the marketplace over the past three years.

Durham Furniture, this country’s oldest continuously operating furniture maker, recently partnered with a North Carolina software company to create an update for its website allowing the retailer – and his customer – to customize any piece in the company’s assortment. This includes both finishes and hardware. What’s more, its successful implementation has allowed the company to shrink the size of its High Point showroom.

Finally, our resident sage Donald Cooper gives his perspective on how to find, hire and keep talent. This has become a critical issue in our industry as restrictions and lockdowns end and our economy establishes a post-pandemic normal. It doesn’t matter whether you’re a manufacturer, a distributor or a retailer, finding top-notch talent to join the team is mission one.

He points out also everyone has to work somewhere and maintains if your company wants to hire the best, you have to prove yourself to be the right choice for them. His thoughts are worth spending some time reviewing.

Click here to enjoy the Autumn 2022 edition of the Merchandiser.