The Brick raises over $467K for Children’s Miracle Network

In a statement, the full-line furniture retailer said hundreds of people joined world-renowned chef David Rocco for an exclusive virtual cooking class this past month which raised $45,020 for the network, which raises money for 14 children’s hospital across Canada and the United States.

The inaugural Cooking for the Kids event – sponsored by KitchenAid – produced more than just delicious food, with 100% of the funds raised through registration fees and individual donations being redistributed to children’s hospitals, supporting critical treatments and health care services.

“The Brick has a longstanding commitment to Children’s Miracle Network – it is an organization that our employees, their families and our generous customers feel truly passionate about supporting,” Dave Freeman, president of The Brick said. “We couldn’t be more thrilled about the success of this event. With David Rocco’s support, we were able to raise funds that will go toward exceptional medical care, the latest equipment and important medical research for children in need.” 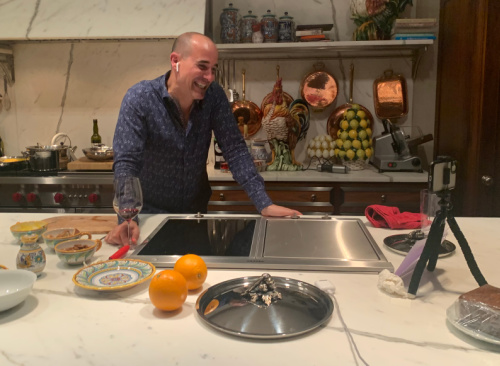 Held on November 19, the virtual event was the first of its kind hosted by The Brick. Participants from across the country joined the live and interactive cooking class, learning to prepare some of Rocco’s favourite recipes from the comfort of their own homes.

“As a father of three, I recognize the important work of Children’s Miracle Network and their impact on children and families,” David Rocco added. “Sharing my passion for food with home cooks across Canada, while working with The Brick to raise funds for an incredible cause, was an opportunity I’m proud to have been a part of.”

In addition to the funds raised from Cooking for the Kids, The Brick raised an additional $422,936 for Children’s Miracle Network through the recent Buy More, Save More, Give More campaign.

The Brick has been a proud partner of Children’s Miracle Network since 2014. As a symbol of its philanthropic commitment, The Brick launched Brickley Bear for purchase, with 100% of proceeds going to the network. The retailer’s fundraising campaign also includes corporate and employee donations and events including Children’s Miracle Network Charity Day, Teddy Bear Toss events, and The Brick Invitational Super Novice Hockey Tournament.

Since making its philanthropic commitment to the organisation six years ago, The Brick has raised over $7.8 million in support of local children’s hospitals. In 2020, The Brick was recognized as Children’s Miracle Network’s Corporate Partner of the Year.

Set to mark its 50th anniversary in 2021, The Brick operates more than 220 corporate and franchise stores across the country and employs more than 5,000 people. It was acquired by Leon’s Furniture Limited in 2013.