The Brick now coast-to-coast with first store in Newfoundland

JOHN’S, Newfoundland – Already this country’s largest full-line furniture banner, The Brick became a truly national retailer with the opening of its first brick-and-mortar store here in Canada’s easternmost province. They are one of the few retailers to have stores in every province across the country.

“As we celebrate The Brick’s 50th Anniversary this year, I am incredibly proud of our continued growth to serve communities across the country,” company president Dave Freeman said in a statement. “Building a stronger presence in Atlantic Canada has long been a goal for our company. With the opening of our new store in Newfoundland, The Brick is now truly coast-to-coast, serving Canadians in every province.” 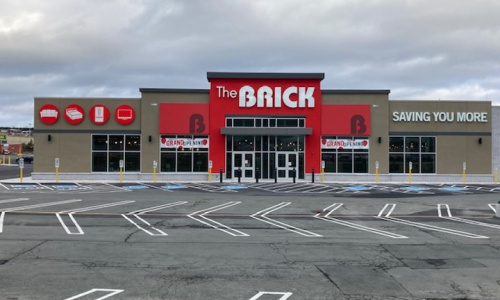 The Brick’s new St. John’s store boasts over 40,000 square feet of showroom space and carries the retailer’s full product assortment including furniture, mattresses, appliances and electronics. With the on-site warehouse and dedicated delivery team, the store can arrange pick-up, delivery and in-home setup of its products promptly. The location has created over 50 new jobs for the local community.

In addition, the brand-new distribution centre located in Dartmouth will provide service and store inventory for The Brick and Leon’s locations across Atlantic Canada, with the capacity to support future expansion in the region. The 168,000 square foot distribution centre will provide faster fulfillment to customers on many top-selling products and has created over 60 new jobs locally.

“The impressive distribution centre features the latest technology and equipment to seamlessly meet the growing needs of our customers,” said Dave Freeman. “As we continue to expand our operations across Atlantic Canada, a cutting-edge facility of this scale has the capacity to service the many divisions within the LFL organization, while providing a safe environment for our employees to work in.”

At press time, The Brick operated some 209 stores across the country including The Brick, The Brick Mattress Store and The Brick Outlet.