Canada has watched too many veteran brick-and-mortar retailers shutter underperforming locations (and in some cases, shut down entirely) in the face of recessions, shifts in consumer behaviour and the rise of e-commerce. Among them have been some names familiar to insiders from this country’s furniture, mattress and major appliance industry such as Sears, Pascal’s Furniture, and Today’s Colonial, among others.

The Brick is one of the few retailers in this country – regardless of its product category – to celebrate its 50th anniversary. And is one of the few to achieve the milestone with only a single change in ownership. 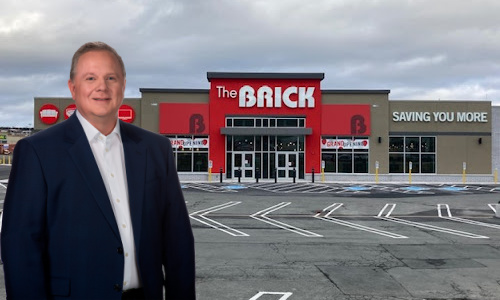 n what has become a familiar story to most industry insiders, The Brick was founded by William H. Comrie in 1971 who gave up what was a promising career as a professional hockey player to take over the family furniture store after his father’s sudden death. He sold that business, gifting the proceeds to his mother, and shortly thereafter opened a single furniture store in downtown Edmonton after securing a loan for what was then the princely sum of $8,000.

Comrie held both leadership and ownership positions in The Brick for the next 40-plus years, until it was acquired by its principal Canadian rival – the Toronto-based Leon’s Furniture – for $700 million in May 2013.

Today, The Brick is a subsidiary of the publicly held Leon’s Furniture Limited and operates a total of 209 stores from coast-to-coast, including some 65 franchise locations (as this issue went to press it opened its first store in St. John’s, Newfoundland, making it a truly coast-to-coast full-line furniture banner with a brick-and-mortar stores in all ten provinces).

In its most recent Retail 100 report, the Centre for the Study of Commercial Activity (CSCA) at Ryerson University ranked The Brick, which remains headquartered in the city where it was founded, as the country’s 47th largest retailer with sales in 2019 of just over $1.34 billion. It is one of only five furniture merchants on the list – the others being its sister banner Leon’s Furniture, IKEA Canada, Sleep Country and Ashley HomeStores.

And as far as Dave Freeman is concerned, the brand’s growth can be attributed to its success of pairing a well-rounded selection of goods with compelling financing options and generous warranties, making it popular amongst shoppers looking to furnish everything from spacious family homes to cozy condos. Freeman is a good position to know, he’s served as president of The Brick since November 2016 but more than that, he’s one of the retailer’s longer serving team members have joined the company in 1980.

“Being a ‘high impact promoter’ is still a very important part of how we go to market,” Freeman told Home Goods Online, adding the brand – which continues to offer ‘no money down’ and deferred payment plans to customers – is proud of its reputation. “For 50 years and counting, our valued customers have come to expect great value, with creative promotions and the flexibility to pay based on their needs and preferences. The concept has evolved in that we offer more options in terms of product and financing solutions.”