WINDSOR, Ontario – Regional furniture retailing powerhouse Tepperman’s celebrated the grand re-opening of its renovated flagship store here last week while announcing it will open a sixth outlet in Ancaster later this year, giving it a beachhead on the very edge of the Greater Toronto Area, this country’s single largest consumer market.

In a statement, the family owned-and-operated furniture, mattress, appliance and electronics retailer said strong local demand and changing customer expectations prompted the company’s renovation plans, which culminated with a ribbon cutting ceremony presided over by Drew Dilkens, the Mayor of Windsor.

Tepperman’s was founded in this southwestern Ontario city – best known as an automotive manufacturing centre – in 1925. Today, it’s in its third generation of family ownership, led by brothers Andrew and Noah Tepperman. 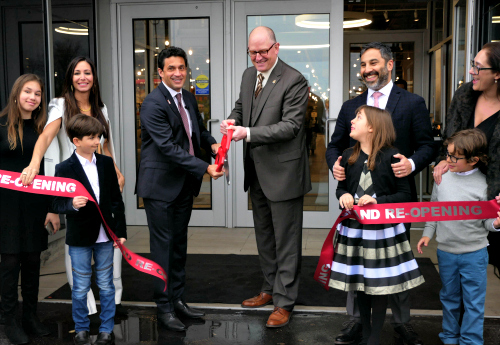 “Tepperman’s is a 94-year-old family business,” company president Andew Tepperman said in a statement. “Throughout the years, we’ve persevered against the depression and recessions, a World War, and economic shocks. We rebuilt after fires and continue to learn, improve and grow every day.

“It’s a privilege to be part of a Canadian owned and operated family business celebrating such a milestone,” he continued. “As we’ve grown, we’ve never lost sight of our guiding principles and our commitment to the communities where we work and live. We will continue to innovate and inspire our valued customers to make their homes even better.”

The new store design was created by Martin Roberts of Martin Robert Designs. Based in New York, he is one of the leading store designers in home furnishings industry, having created retail concepts for a number of U.S. retailers including Chapin Furniture, the Furniture Mall of Kansas and America’s Mattress, among others.

His first assignment for Tepperman’s dates back to 2016 with the development of the Kitchener store. He subsequently designed the Sarnia (which opened last year), Chatham and the Windsor locations. The new concept integrates an enhanced shopping experience, making the in-store atmosphere contemporary and stylish, and includes a refreshment area and an interactive kid’s zone.

With five large-format retail stores across Southwestern Ontario – aside from Windsor, Sarnia, Chatham and Kitchener, it also has a store in London – Andrew Tepperman said the company is on its way to becoming an industry leader in providing stylish home furnishing products at great prices.

Although, no target opening date has been set, the company will open in Ancaster – a suburb of Hamilton – in late 2019 in a building that once housed a Sears store. “The expansion comes after the renovations of the Windsor and Chatham locations, and will allow Tepperman’s to serve a wider audience with different style preferences,” Andrew Tepperman said.