WINDSOR, Ontario – Tepperman’s, the family-owned independent furniture, mattress, appliance and electronics retailer based here has kicked-off its 95th anniversary celebration with the unveiling of a new home page for its web site and a new mascot called Tepps.

The event was kicked off with the retailer’s third generation leadership team – including president Andrew Tepperman and secretary/treasurer Noah Tepperman – visiting each of the six large format stores they operate across southwestern Ontario to thank their employees with cake and gifts. 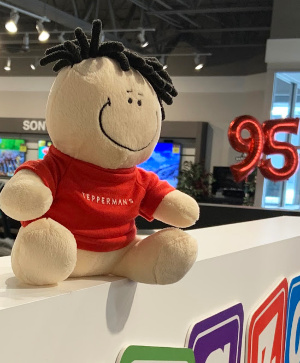 Tepperman’s was founded in 1925, when Nate Tepperman immigrated to Canada from Europe at the age of 20 and began selling rugs door to door. He carved out a unique niche in the marketplace by selling items on credit and collecting payment in instalments. This model remained a key part of Tepperman’s success for nearly 100 years as it remains one of the few home furnishings retailers in North America to offer in-house credit.

“Ninety-five years ago, Nate and Rose Tepperman created a foundation that Bill and Rochelle Tepperman strengthened, and this has continued to be transformed by the third generation, alongside an incredible team,” Andrew Tepperman said in a statement.

He notes it’s a family business that has gone to great lengths to stay current and relevant. It’s something that’s been achieved by investing in cutting-edge equipment while maintaining a personal touch their customers have relied on. Every store today integrates an enhanced shopping experience, making the in-store atmosphere contemporary and stylish, and includes a refreshment area, interactive kid’s zone and courtesy electric car chargers.

He also maintains the company’s values remain the same as they did in 1925: do business with integrity, provide great service and make a positive impact in the communities where they are located. For example, earlier this year, the company was named a finalist for the Corporate Responsibility Award presented by the London Chamber of Commerce.

The retailer is marking the anniversary in a number of ways that are intended to enhance the customer experience: for example, it’s giving a Tepps stuffed doll to children visiting the stores with their parents, coupled with colouring contests and expanding the menu at their in-store cafés.

On the product side, they’ve ramped up their delivery capacity to better meet delivery time frames while putting a greater emphasis on product made in Canada. “We were very fortunate this year with all the virus and rail disruptions,” Tepperman told Home Goods Online. “Knowing it was our 95th anniversary, we made major buys and loaded up our distributions centres prior to Chinese New Year, having no idea what was coming down the road.

“The in-stock ratio will be a great competitive advantage as many retailers start to run low,” he continued, adding, “It’s not an easy process to quickly shift sourcing from overseas to domestic.”