Home / Article: Tariffs: the reasons why

Tariffs: the reasons why

Last December, five Canadian upholstery manufacturers jointly applied to the Canadian Border Services Agency (CBSA) seeking tariff protection for a select group of leather-wrapped goods exported by certain companies located in the People’s Republic of China (PRC) and the Socialist Republic of Vietnam. They alleged their governments illegally subsidized the cost of key components, giving them an unfair advantage in the marketplace.

The members of this consortium include two members of Palliser Furniture Holdings, a 75-year-old family operated company based in Winnipeg, Manitoba and perhaps this country’s largest furniture resource. They are its namesake Palliser upholstery division and EQ3, a contemporary furniture specialist with its own retail network. The others are family-owned and operated furniture makers based in the Greater Montreal Area – Elran, Jaymar and Fornirama.

Although not one of the original complainants, the Toronto-based Brentwood Classics, a family owned and operated specialist in upper mid-range to high-end fabric upholstery, has indicated to the CBSA it supports the imposition of the tariff regime. 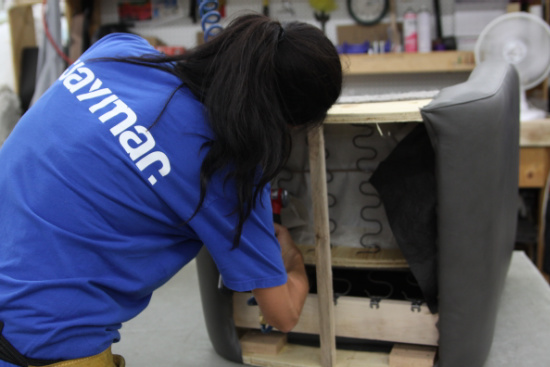 In early May, after a five-month investigation the CBSA imposed antidumping tariffs on motion furniture – such as recliners – and leather stationary upholstery imported into Canada from both the PRC and Vietnam. The duties demanded ranged from a low of 17% to a high of 296%. No other furniture category – for example, fabric stationary upholstery or bedroom furniture – is subject to the tariff. (A complete list of the tariff rates and the companies subjected to them can be found on the CBSA’s web site.)

Peter Tielmann, chief executive officer of the Palliser Furniture Holdings, notes while the CBSA imposed the duties in early May of this year, the effort to bring these issues to light has been ongoing for some time. “The process started four years ago,” he said in a recent interview, adding like almost everything else it was impacted by the ongoing global pandemic. “We did not choose this timing. The current disruption caused by COVID is a short-term issue and we will need to work through it together.”

For those advocating the tariffs, the goal is to focus attention on many of the illegal, but long tolerated, trade practices of both the People’s Republic of China and its client state, the Social Republic of Vietnam. And, in so doing, at least partially level the competitive playing field for the dwindling number of Canadian leather upholstery and motion furniture manufacturers disadvantaged by those same practices, which are contrary to the rules set down by the World Trade Organisation (WTO).

It should be noted the PRC was admitted to the WTO almost 20 years ago and is subject to its regulations and practices.

“Unfair trade practices are being used by foreign counties as tools to dominate domestic industries,” Tielmann maintains. “Once that goal is reached prices will go up. The low prices are only bait and a short-term gain for some, at best. These actions are necessary to allow the Canadian furniture manufacturing industry to survive and ultimately to save jobs and knowledge in Canada.”

The complainants are adamant the goal isn’t to force these imported goods off the retail floor, but merely to level the competitive playing field. They maintain both the PRC and Vietnam – but especially the PRC – operate a structure of subsidies and government-controlled production that result in an artificial and unfair export price, accusations they believe are well-documented in the international press.

The Quebec Furniture Manufacturers Association (QFMA) – the only such trade group still operating in North America – has come out in support of the anti-dumping action and the reasons behind it.

“The idea here is not to squelch competition but that competition has to be fair,” QFMA president and chief executive officer Gilles Pelletier told Home Goods Online. “Furniture dumping can result in consumers acquiring products that may not be safe, up to code or built by workers who are not of age and not paid a decent wage. Plus, after all, dumping is illegal – this is true for furniture but for other goods produced overseas and imported into Canada.”

The five complaining manufacturers stress their objective is to establish a level playing field unfettered by artificial foreign government intervention.