OTTAWA – Housing starts continued to climb in July by all three measures employed by the Canada Mortgage & Housing Corporation (CMHC), marking the seventh consecutive month of increases. This is good news for furniture, mattress and major appliance retailers although leading observers believe with the slowing of the resale market for existing homes, the housing market should begin to cool noticeably in the coming months.

The federal housing agency reported the trend in housing starts was 217,550 units in July; up from 215,175 unites in June. The trend is the six-month moving average of the monthly seasonally adjusted annual rates (SAAR). It is used to complement to the SAAR to account for considerable swings in monthly estimates which can be misleading as they are driven by the multi-unit segment of the market which can vary significantly from one month to the next.

“In July, Canada’s pace in housing construction ramped up for a seventh consecutive month,” CMHC chief economist Bob Dugan said in a statement. “British Columbia and Alberta were the main contributors to the higher trend in housing starts. While B.C.’s construction coincides with near-record low completed and unsold units in the past few months, Alberta’s inventory of new unsold homes is ramping up, highlighting the need for managing inventories.” 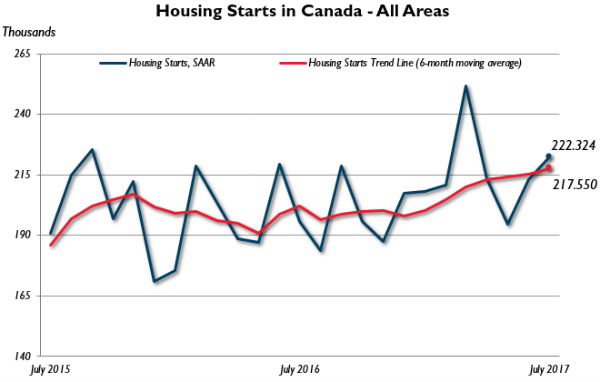 The agency noted housing starts in the Greater Toronto Area trended lower in July although they kept pace with the average level seen so far this year. However, upticks in building semi-detached and town house units suggests affordability issues are driving demand for less expensive types of housing.

Meanwhile, the construction of more townhouses and apartments produced increases in housing starts of the Greater Vancouver Area, particularly in the outlying suburbs of Burnaby, News Westminster and Coquitlam. Once again, affordability is impacting consumer demand.

Rural starts were estimated at a seasonally adjusted annual rate of 16,202 units.

On an actual basis, starts in population centres with populations of 10,000 or more were up across the board nationally.

For the year-to-date, single starts were up in every province except Newfoundland & Labrador and Quebec.

Meanwhile, multi-unit starts – whether apartments, town houses or some other form of linked housing whether for the condominium or rental market – were measured at a preliminary 12,309 unit in July – 17% greater than the 10,506 units for the same month last year.

Starts in this category for both the month of July and the year-to-date were up in every province except Manitoba and Saskatchewan.

“Given the lag between a new home sale and ground breaking, it would appear that the strength in housing starts over the first six months of 2017 is largely due to past strength in housing demand,” Diana Petramala of TD Economics said in her note. “At this point, existing home sales have fallen for three consecutive months, starting what we believe to be a soft landing in Canada’s housing market. The slowdown in the existing home market is likely to lead to a softer pace of construction activity in the second half of the year; particularly given mortgage rates are rising.”

“Overall, we look for housing starts to gradually grind lower, trending to under 200,000 later this year and dipping to below 180,000 next year as the cool-off in the existing home market spreads to new construction activity,” Petramala concluded.