OTTAWA – Housin starts fell in every region of the country except Atlantic Canada last month, according to the latest figures from the Canada Mortgage & Housing Corporation (CMHC). They also fell by all three measures used by the federal housing agency, the trend, the seasonally adjusted annual rate (SAAR) and actual starts.

“The national trend in housing starts decreased in July, reflecting a decline in the SAAR of multi-unit dwellings in urban centres from the near-historical high registered in June,” Bob Dugan, CMHC chief economist said in a statement. “Despite decreasing in July, the trend remains well-above historical averages, reflecting elevated levels of multi-unit starts in most major markets that has more-than-offset declining single starts.”

CMHC uses the trend measure as a complement to the monthly SAAR of housing starts to account for considerable swings in monthly estimates, which are largely driven by the multi-unit segment of the market which can vary significantly from one month to the next. 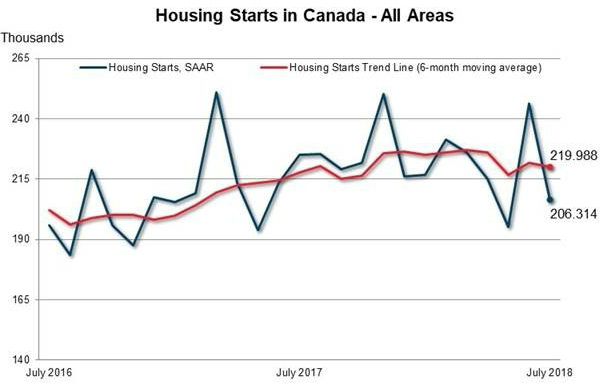 Rural starts were estimated at a seasonally adjusted annual rate of 16,221 units.

Actual starts of single family homes came in at a preliminary 5,341 units for the month of July, an 18% drop from the 6,506 units recorded for July 2017. They were down in every region of the country, led by Ontario where they fell 23%.

Meanwhile, multi-unit segment starts – whether apartments, townhouses or other linking dwellings whether for the condominium or rental market – fell 9% in July to a preliminary 11,400 units from 12,468 units for the same month last year. The decline was sharpest in Quebec (-19%) and Ontario (-14%) although upticks were recorded in the Prairies and Atlantic Canada.

Multi-unit for the first seven months of 2018 were pegged at 80,204 units – a gain over 8% over the comparable period’s 74,598 units, thanks mainly to the segment’s strong performance in during the first quarter. All regions reported gains, except the Prairies where starts fell 8%.

In his research note, Rishi Sondhi of TD Economics observed that while housing starts dropped, they remain healthy. “As expected, starts declined significantly in July, albeit by more than markets had penciled in,” he said. “However, the monthly data can be noisy and homebuilding remains healthy when viewed on a trend basis.”

He also pointed out July was the first month where retaliatory tariffs on steel and aluminum imports from the U.S. were in effect, which is likely to raise construction costs faced by Canadian builders. “While this is negative for homebuilding, July’s pace was still healthy and starts look likely to remain elevated in the near-term,” Sondi said, adding, “All told, today’s report matches our expectation that starts will pull-back closer to the more fundamentally supported 200,000 mark in the second half of 2018, as higher interest rates and regulatory changes continue to limit demand.”