Home / Article: Spring Merchandiser looks at a year of transition

Spring Merchandiser looks at a year of transition

BRIGHTON, Ontario – The Spring 2022 edition of the HGO Merchandiser reveals that Canadian brick-and-mortar furniture stores had a great 2021. Sales set a new annual high, but our report also notes the pundits don’t expect a repeat performance. But the reader also learns the consumer has money saved and she seems ready to continue spending on furniture, at least in the short term.

In this article, we learn the records set last year by these brick-and-mortar retailers was, in the words of an expert whose work I respect, “an anomaly, not a trend,” and therefore, not likely to be repeated. 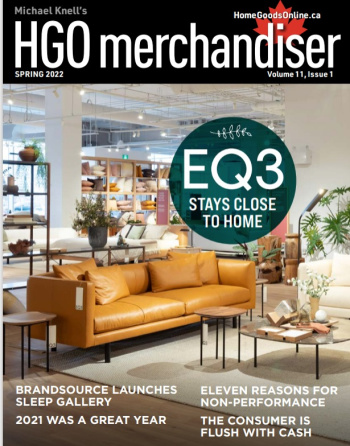 In this issue, we also chat with Pedro Antunes, chief economist of the Conference Board of Canada about the state of the Canadian consumer. From him we learn the consumer has saved a lot of money over the past two years and the indications are she’s going to spend at least some of it on furniture, mattresses and appliances. That isn’t to say she isn’t going back to restaurants and theatres and isn’t booking that family vacation in the Bahamas, but she probably bought a new house during the pandemic and isn’t done furnishing it.

There has been plenty of other activity on the retail front in recent months. For example, BrandSource Canada – the primary go-to-market banner operated by Mega Group – has launched a new in-store mattress and sleep accessories gallery that is designed to increase both sales and profitability for the participating member.

Called BrandSource Sleep, these galleries range in size from 1,500 to 3,000 square feet and feature product from Tempur Sealy Canada and Simmons Serta Bedding. Nine of these galleries opened in late April and the group’s goal is to have 75 in operation at the end of 2025.

Meanwhile, EQ3, the Canadian contemporary furniture retailer and manufacturer has opened its new flagship store. Located in the largest shopping mall in its hometown of Winnipeg, the store’s design is an exercise in experiential retail, created to celebrate the company’s Prairie roots and to give the customer the feeling of a well-appointed home. Our report was written by HGO contributing editor Ashley Newport.

Rounding out this issue was HGO’s resident retail guru, Donald Cooper, who rounds out the eleven reasons for non-performance. If someone on your team isn’t doing the job to the standard you want it done, Cooper says the odds are it’s your fault. As the boss, whether store owner or manager, it’s your job to give every team member the tools needed to succeed. Their performance is your responsibility.