MONTREAL – The last three remaining licensed Ashley Furniture HomeStores in Quebec are expected to close their doors forever by the end of October, once the ‘store closing sale’ has run its course. The sale was ordered after the stores’ owners sought court-order protection under the Company’s Creditors Arrangement Act (CCAA) this past June.

Michael Smith, founder and chief executive officer of Smith Business Solutions, a London, Ontario-based retail consulting firm specialising in organising high impact sales events, confirmed the asset purchase was awarded to his company which is currently conducting the store closing sale at the retailer’s locations in the Montreal suburbs of Laval, St. Jerome and. St Hubert. 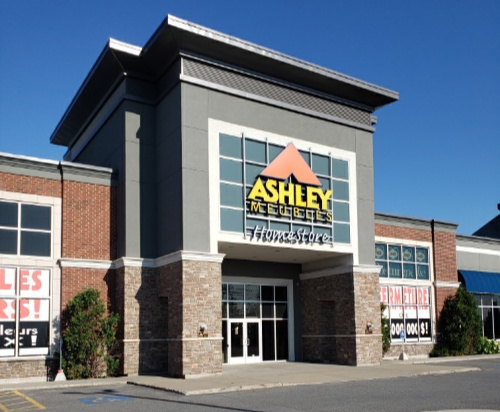 The Montreal office of Deliotte LLP was appointed to monitor the CCAA proceeding.

Local media reports have said the locations in Laval and St. Hubert are expected to close by the end of September with only the St. Jerome scheduled as the last to close when the sale of inventory, with an estimated value of $20 million, ends next month.

Originally, the event, launched in mid-July, included a fourth location in St. Leonard, which has since closed. In all, the Ashley stores were believed to have about 80 employees.

All four licensed stores were operated by Groupe Opex, who majority shareholder is Groupe Marchand – the operators of Meubles Marchand, a full-line furniture appliance retailer with three stores across Quebec’s Abitibi-Témiscamingue region. The company opened its first Ashley HomeStore in 2008.

“In June they sought creditor protection as a result of the declining retail market and challenges competing with the evolving online market,” Smith said in a statement. “We plan to have the remaining three showrooms and 50,000 square foot distribution centre completely liquidated by the end of October.”

Groupe Opex wasn’t the only independent furniture retailer of note to exit in the business in recent months. Maison Ethier was liquidating its two stores in suburban Montreal after also filing for CCAA protection. Pier One Imports announced earlier this year that it was closing all its Quebec stores before the end of 2019.

There are approximately 60 licensed Ashley Furniture HomeStores across the country, several which are owned and operated by The Dufresne Group of Winnipeg. In turn, they are part of the retail division of Ashley Furniture Industries, the Arcadia, Wisconsin-based case goods and upholstery resources. There are about 900 Ashley Furniture Stores in 54 countries worldwide with estimated retail sales of US$6.5 billion annually.