Founded in 2017 by Lior Ohayon and Aaron Spivak, Hush has quickly become a celebrated household name and one of this country’s fastest growing digital retailers. The pair, who are also Forbes 30 Under 30 selections and winners, launched its weighted blanket in 2018. Within its first 24 months, the company launched one of the 10 most successful Kickstarter campaigns ever and earned Most Epic Pitch during CBC-TV’s Dragons’ Den 2019 season. 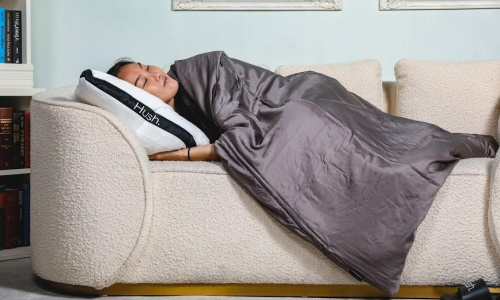 Hush’s weighted blanket continues to transform the sleep industry with its Iced Cooling technology, driving mass interest in new weighted technologies that support a good night's sleep. With an emphasis on community-focused digital marketing, the company has rapidly attracted a loyal customer base.

“We are thrilled to welcome Hush into our portfolio of relevant brands, as we strategically work to expand our sleep assortment, diversify our omnichannel approach and bring a world-class experience to all customers in support of better tomorrows through better tonights,” SCC president Stewart Schaefer said in a statement.

“We are impressed by the company’s exceptional growth and highly engaged community and look forward to supporting their expansion with our market knowledge, infrastructure and logistics capabilities. Their aggressive and dynamic direct-to-consumer model within Canada and the U.S. perfectly aligns with our growth roadmap as we explore opportunities in new markets with differentiated customer segments,” he continued.

“We founded Hush with the intent to disrupt and fuel innovation in the sleep space,” Hush co-founder Lior Ohayon said. “We are eager to enter the next phase of our growth story doing what we do best by expanding our product line and pushing the sleep industry's boundaries for the benefit of customers around the world. Sleep Country’s deep knowledge of the industry and innovative spirit make them the perfect partner to help us excel in this journey.”

“We are excited to see this partnership come to fruition and know that today’s announcement will deliver superior experiences to our dedicated Hush community,” Aaron Spivak, Hush’s other co-founder added. “Joining forces with a best-in-class and trusted brand like Sleep Country means Hush will be able to rapidly scale, unlock attractive avenues for market expansion and revenue growth. We move forward with optimism, enthusiasm and confidence in our growth trajectory alongside Canada’s leading omnichannel sleep retailer.”

Hush will operate as an independent entity led by Ohayon and Spivak in their respective roles with a board of directors comprising of the senior management of SCC and Hush.

Transaction details
In its announcement, Sleep Country said it agreed to acquire a 52% majority stake in Hush for an initial amount of $25 million – based on an initial valuation of $48 million – or approximately 9.0x Hush’s trailing 12-month EBITDA as of September 30, 2021. SCC Sleep Country will acquire the residual 48% of Hush in annual 16% stake increments thereafter starting March 31, 2023. The future instalments will be acquired at a multiple of up to 7.0x applied to Hush's trailing 12-month EBITDA.

SCC, which is expected to announce its third quarter 2021 financial results on November 12, operates three banners including Sleep Country Canada, with omni-channels across the country except Quebec; Dormez-vous, the largest mattress specialist in Quebec; and, Endy, this country’s leading direct-to-consumer online sleep retailer, supported by 287 stores, 17 fulfillment centres and two storage hubs across Canada.