TORONTO – Sears Canada is seeking approval from the Ontario Superior Court of Justice to sell its wholly-owned subsidiary, Corbeil Électrique Inc., a specialty retailer of major appliances, to Am-Cam Èlectromènagers Inc. as a “going concern.” The terms of the deal were not disclosed.

Headquartered in Montreal, Am-Cam is the parent company of Distinctive Appliances, a white goods distributor with showrooms in SOFA, the permanent showroom annex of the International Centre in Mississauga, Ontario and in Montreal at 8210 Devonshire Road. 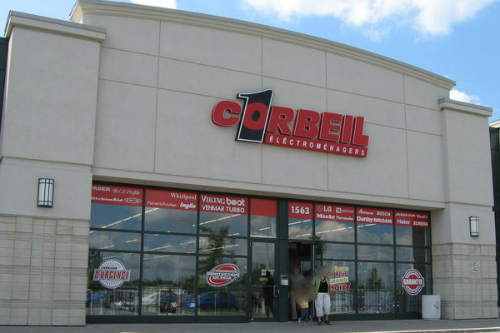 Distinctive represents a number of high-end appliance manufacturers from both Europe and North America such as Blomberg, American Range, Bertazzoni, Faber and Speed Queen, among others. It is also an active supplier to builders and interior designers.

According to documents filed by the court-appointed monitor, Distinctive intends to continue operating Corbeil as an independent business, including its franchise network. “The transaction is expected to result in the continued employment of at least 90% of Corbeil’s corporate employees as well as the employment of the employees located in its franchised locations,” Sears Canada said in a statement.

Corbeil currently operates about 32 stores in Ontario and Quebec – 16 of them franchise stores (12 located in Quebec and four in Ontario). According to a senior manager with Mega Group, the franchisees have joined the cooperatively-owned buying group, primarily for financial support.

There are also two corporate outlets operating as a ‘store-within-in-the-store’ inside two Sears Home locations – one in Ancaster and the other in Whitby, Ontario. Sears Canada has already announced it will close the Ancaster outlet as part of its ongoing restructuring efforts.

Sears Canada acquired Corbeil when it purchased what is now Cantrex Nationwide in 2005 and retained the operation after it sold the Montreal-based, non-member owned buying group to Nationwide Marketing Group of Winston-Salem, North Carolina in 2012.

A white goods specialist, Corbeil was originally founded in 1949 and operated as a single-unit retailer until the 1990s. At the time of its acquisition by Sears, it was recognised as one of the fastest growing appliance retailers in the country. But like most other merchants, it was hard hit by the recession of 2008.

Corbeil carries both major and small kitchen appliances – including vacuum cleaners, coffee makers, mixers and the like – in the upper middle to high-end price points. It is a Distinctive Appliances customer, carrying Faber and Speed Queen among others. Corbeil also carries major appliances from most of the industry’s major players including Samsung, LG, Whirlpool, Bosch, Jenn-Air and Maytag.

According to the monitor, the deal should close in mid-December.