Home / Article: Say what you believe

Say what you believe

How do you clearly differentiate yourself when there are too many other people selling what you’re selling? How do you stand out and make powerful connections with your target customers? How do you sell without ‘selling’? One of the most effective ways is to clearly state what you believe in. Yet very few businesses do it.

I’m not talking about stating what you believe in the spiritual or religious realm, although some businesses do that. For example, the business mission of Interstate Batteries, a privately owned battery marketing and distribution company is “To glorify God and enrich lives as we deliver the most trustworthy source of power to the world. We fulfill our purpose by doing business based on Biblical principles – such as honesty, humility, service, and care – in a way that is welcoming and loving to all.”

In-N-Out Burger and Cook Out, two American burger chains, print Bible verses on their cups and wrappers. Chick-fil-A, another American fast food chain, is well known for its conservative religious beliefs and has taken a lot of flack for its anti-gay activism.

Several years ago, I came across a business in Toronto named ‘The in Jesus I Believe Air Conditioning Company’. I do not make this stuff up. When I looked them up a few years later, they had gone out of business. Go figure!

What I’m talking about is stating what you believe the customer experience should be and, therefore, what you commit to deliver. We humans love doing business with folks who believe in delivering what we believe we should be getting when we spend our hard-earned money.

Here’s an excellent example from Goettl Air Conditioning, which has locations in Arizona, Nevada and southern California. They state clearly on their web site what they believe in: 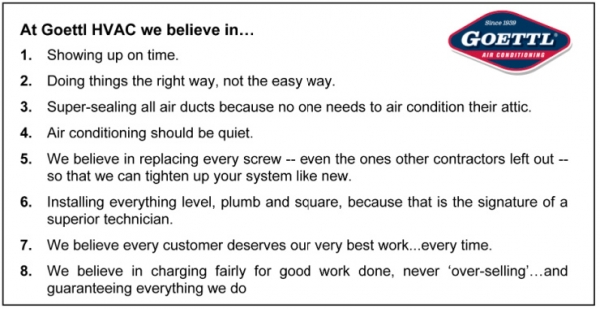 Does this sound like a company you would want to do business with? Do they believe in delivering the value, integrity, professionalism and experience you believe you should get? And yet, they didn’t try to sell you. They just told you what they believe in. This is genius!

What would this look like in your business? Below are the three steps to making it happen.

Step One: It starts with understanding and documenting what your target customers really want – and what they don’t want.

Step Two: The next step is to create a business, a team, the technology, equipment and systems and a culture of commitment to deliver what you and your customers believe in.

Step Three: The final step is to state your clear customer commitment in the form of a ‘belief statement’ like the one above.

The thing that makes this approach so effective is it doesn’t sound like a sales pitch. You’re just stating what you believe – and it grabs people. Done right, it can make you famous.

To get started, set aside one hour with the best minds and hearts in your business to discuss and document what your target customers really want – and what they don’t want. Think and feel like a customer. Then, carry on with the next two steps listed above.  Caution: don’t do step three until you’ve completed step two. It will end badly!

Here’s something I’ve been thinking about this week:

The difference between diversity and inclusion. These two words are being thrown around a lot these days, sometimes without much thought as to their actual meaning. For example, a business can have a workforce that’s very diversified by gender, ethnicity, religion or sexual orientation but absolutely not be inclusive.

Being inclusive means all employees feel safe, receive respect, are compensated fairly and have an equal opportunity to advance based on ability and desire. Simply stated, they feel that they belong, they make a difference and they have a future.

Bragging about being diversified without truly embracing inclusion is hypocrisy.

That’s it for this week. Stay safe. Live brilliantly. Do at least three important or kind things each day!