MISSISSAUGA, Ontario – Samsung Electronics Canada was named the 2018 Manufacturer of the Year for both major appliances and consumer electronics by Energy Star Canada for the second consecutive year in both categories.

In a statement, the company said the designation highlights how its continued commitment to energy-efficient product innovation is providing real-world impact and benefits for Canadian households.

“We realize that consumers, if not all Canadians, are looking for ways to save money while being environmentally responsible. We thank the Energy Star team for this recognition and are proud that Samsung technology has a meaningful impact on the lives of consumers across Canada,” Paul Brannen, chief operating officer of Samsung Canada said in a statement. 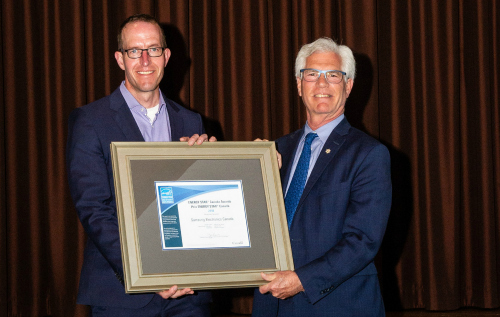 “Congratulations to Samsung Canada for supporting and promoting Energy Star certified products. Improving energy efficiency contributes first-hand to reducing greenhouse gas emissions, and Samsung’s efforts are making it easier for Canadians to save energy and money while protecting the planet. We thank you for your ongoing commitment to improving the availability of energy efficient products in Canada,” added Jim Carr, Canada’s Minister of Natural Resources.

Additionally, Samsung expanded its market penetration of Energy Star certified home appliances by 23 models, an increase of 19% from the previous year, while also leading the Canadian television market with an increased number of certified models – 18% more than its closest competitor.

Recognising the importance of energy efficient innovation as an electronics manufacturer, Samsung continues to educate Canadians on the benefits of purchasing Energy Star certified products, increasing the presence of program information and logos on its Canadian web site by 16% in the previous year.

For the tenth time in the program’s history and the fifth consecutive year, Home Depot Canada’s has been named the program’s National Retailer of the Year.

For the past 17 years, the Energy Star program has been operated in a voluntary partnership between the Government of Canada and more than 1,500 organisations working to use this country’s natural resources more wisely through greater energy efficiency. For more information about the program, visit its web site at www.energystar.gc.ca.