ATLANTA – In a move that caused something of an uproar south of the border, Serta Simmons Bedding (SSB) announced it has entered into an agreement to acquire Tuft & Needle, one of the original mattress e-commerce players. While terms were not disclosed, the transaction is expected to close in the next 60 days.

In a statement, SSB said the move will “create the number one customer-centric house of brands in mattress and bedding.

“The transaction brings together the largest manufacturer, marketer and distributor of mattresses in the world with the original market disruptor and one of the nation’s leading direct-to-consumer sleep product companies.”

Like its American parent, SSB Canada is a dominant mattress manufacturer in this country, producing the Serta, Beautyrest and Simmons bedding brands. However, unlike most of its major competitors – such as Casper, Purple and Saatva – Tuft & Needle doesn’t sell directly to consumers in this country. Instead, it’s product assortment is offered on Amazon’s Canadian platform.

However, in response to an inquiry from HGO, a spokesperson for SSB said its too early in the process to discuss details of what the deal means for its marketing and merchandising plans for Canadian retailers. 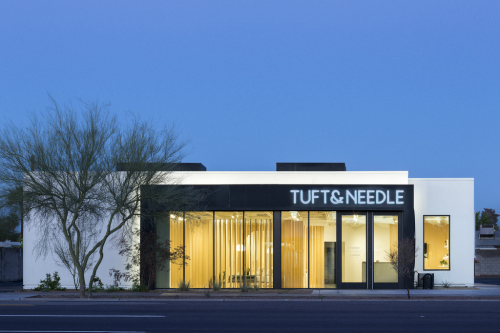 SSB believes this merger with T&N will strengthen its market leadership position – particularly in the United States – and expand its offering in the direct-to-consumer segment. The combined company will offer innovative product lines, enhanced services, and better value to consumers, while accelerating Tuft & Needle’s trajectory as a leading direct-to-consumer mattress and bedding brand. It is also expected to generate operational efficiencies for both companies.

“Tuft & Needle is the original disruptor in the direct-to-consumer mattress industry and is a rare example of an economically healthy, fast growing start-up,” said Michael Traub, SSB chief executive officer. “Combining SSB’s nearly 150-year legacy and leadership in product innovation with Tuft & Needle’s expertise in delivering a best-in-class consumer experience, this merger will greatly accelerate our growth and innovation in the direct-to-consumer segment, and significantly enhance our e-commerce capabilities across brands.”

Tuft & Needle co-founders JT Marino and Daehee Park will report to Traub and join SSB’s leadership team. In addition to leading T&N, they will help drive the continued transformation of SSB into an omni-channel, consumer-centric company.

One benefit of the merger, SSB said is its retail partners will have access to new offerings, including advanced consumer insights, avenues for generating higher foot traffic, and consumer-centric innovations as key drivers for growth in the evolving market. T&N will lead the development of these omni-channel marketing tools which to company expects to roll out in early 2019.

“We started Tuft & Needle because we saw a clear opportunity for the mattress industry to put the customer at the center of everything it does. The industry is evolving faster than we could have imagined, and we’re proud to have been the catalyst and driver for the transformation,” Marino said. “By joining the SSB team, we look forward to fully leveraging each organisation’s strengths and accelerating our trajectory together towards the vision of being recognised as the global leader in sleep.”

He added Tuft & Needle will continue to be based in Phoenix, Arizona and operate as an independent brand “while immediately beginning to infuse our learnings and capabilities into the broader SSB organisation.”

According to Internet Retailer, T&N is one of the fastest growing direct-to-consumer mattress retailers in the U.S. and estimated its sales last year at US$160 million – five times greater than that generated by Tomorrow, SSB’s internet brand. It also operates three brick-and-mortar stores and expects to open a fourth later this year.

SSB operates 30 manufacturing plants across the U.S. and Canada with revenues estimated to be more than US$3.3 billion last year.