TORONTO – In what might be seen as the end of the pandemic boom, Sleep Country Canada Holdings (SCC) reported sales and earnings for the third quarter were down compared to the same period last year, although for the first nine months both were up nicely for this country’s largest mattress and sleep goods retailer.

The company said this was mainly driven by a 11.1% decrease in same store sales, offset by incremental revenue earned from Hush which SCC acquired in the fourth quarter of 2021 as well sales by the two new stores opened during 2022.

SCC’s e-commerce activities are led by Endy.com, this country’s largest online mattress retailer. It also operates virtual stores for both its Sleep Country and Dormez-Vous banners. It also sells through the online platforms operated by several other Canadian retailers including Walmart Canada, Best Buy Canada and Loblaws. It is also the Canadian distributor for two U.S. based direct-to-consumer mattress makers, Purple and Casper as well as Simba Sleep, which is based in the United Kingdom.

While SCC doesn’t report sales by banner – either brick-and-mortar or online – it does by product category. 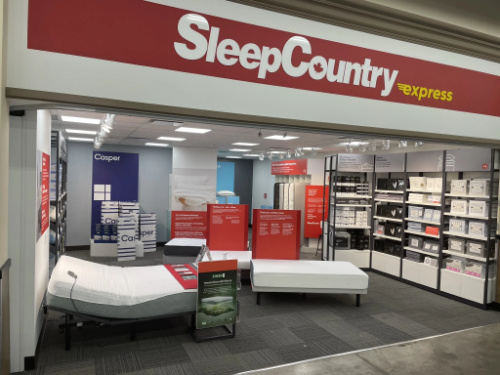 During the third quarter, the company opened a new Sleep Country store in St. Thomas, Ontario, bringing its store count to 287. It also launched the next phase of its Sleep Country/Dormez-Vous express stores in Walmart Supercentres with the opening of a new location in Scarborough.

SCC also donated $100,000 to the Canadian Mental Health Association (CMHA) in support of its back-to-school campaign. It also gave more than $375,000 worth of mattresses and beeding to the Ukrainian Canadian Congress in Quebec this past August, bringing the total in-kind donations in support of assisting Ukrainians displaced by the war to $640,000.

“In Q3, we saw the sentiment in consumer spending change rapidly as the quarter progressed. Despite a decline in revenues due to consumer uncertainty fueled by rising interest rates and concern of a possible recession, we are very proud of our sustained growth in market share that we have achieved over the past three years,” SCC president and chief executive officer Stewart Schaefer said in a statement.

He also pointed out while same store sales declined in 2022’s third quarter, SCC’s stacked same store growth for the past three years amounted to 14.0%.

For the nine months ending September 30, 2022, SCC revenues totaled $685.6 million, up 5.6% from the $649.0 million rung-up for the same period last year. The uptick was attributed to a same store sales increase of 2.2% as well as incremental revenue from Hush and the opening of two new stores during the period.