OTTAWA – The market for existing homes continued to cool in August, albeit modestly, according to the latest figures from the Canadian Real Estate Association (CREA), even though sales were up a modest 1.3% over July. While that broke a string of four straight monthly declines, resale activity was still 13.8% below the record set this past March.

The realtors’ group also reported actual sales were 9.9% below the level seen in August 2016 and the number of new listings fell a further 3.9% from July to August.

August’s increase was driven by a rebound in the Greater Toronto Area (GTA), where sales climbed 14.3% on a month-over-month basis. Beyond that, there was a roughly even split between those local markets posting a sales uptick and those posting declines.

“For Canada net of the GTA, sales activity was flat. While it was the first monthly increase in activity since Ontario’s Fair Housing Policy was announced, GTA sales activity remained well down compared to the peak reached in March (-36%) and year-ago levels (-32%),” CREA said in its statement, adding sales were down from year-ago levels in about 60% of all local markets, led by the GTA and nearby housing markets. 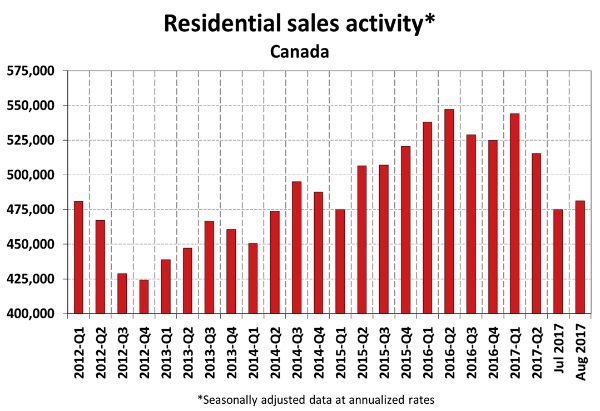 “Experience shows that home buyers watch mortgage rates carefully and that recent interest rate increases will prompt some to make an offer before rates move higher, while moving others to the sidelines,” CREA president Andrew Peck said.

“Time will tell whether the monthly rise in August sales activity marks the beginning of a rebound, particularly in the Greater Golden Horseshoe region and other higher-priced urban centres,” CREA chief economist Gregory Klump remarked. “The picture will become clearer once mortgages that were pre-approved prior to recent interest rate hikes expire.”

The number of newly listed homes slid a further 3.9% in August, marking a third consecutive monthly decline. The national result largely reflects a reduction in newly listed homes in the GTA, Hamilton-Burlington, London-St. Thomas and Kitchener-Waterloo, as well as the Fraser Valley.

With sales up and listings down in August, the national sales-to-new listings ratio rose to 57% compared to 54.1% in July. A ratio of between 40% and 60% is generally consistent with balanced national housing market, with readings below and above this range indicating buyers’ and sellers’ markets respectively.

Some 70% of all local markets were in balanced market territory in August 2017, up from 63% the previous month.

The number of months of inventory represents how long it would take to completely liquidate current inventories at the current rate of sales activity. There were five months of inventory on a national basis at the end of August 2017, down from 5.1 in July and slightly below the long-term average of 5.2 months.

In his research note, Michael Dolega, director and senior economist at TD Economics, observed that outside of the GTA, the resale market was largely flat across the rest of the country. “We expect the GTA market to continue along its path of a soft landing, with further gains in sales activity expected and prices likely to begin to turn positive in the coming months,” he said, adding, “Such a dynamic is corroborated by the fact that the sales to listings ratio has now balanced after three months of very soft conditions.”

He is also expecting the Vancouver market to tighten and believes prices will be reined in by affordability constraints and rising interest rates, which will continue to impact sales going forward.

“After raising rates twice in the past two months, the Bank of Canada is expected to hike once again later this year, with another hike or two likely next year. The rising interest rates should begin to more forcefully impinge on Canadian housing activity,” Dolega said, concluding, “activity should nevertheless grow given the fundamentally supported demand related to strong job growth and strengthening wage dynamics.”