The 24,000 square foot store is located at 640 Balmoral Street, the site of what used to be Reid’s Liquidation Centre. A sizeable addition was added to the structure which also underwent a significant restructuring of both the interior and the exterior of the building.

The product assortment on the floor is reflective of Ashley HomeStores everywhere across North America, displaying living room, dining room and bedroom furniture as well as the finishing details such as lamps, rugs and accessories – all at what Ashley, the largest residential furniture manufacturer in the United States, describes as “value” price points. The store will be supplied by the company’s three million square foot distribution centre in Arcadia, Wisconsin. 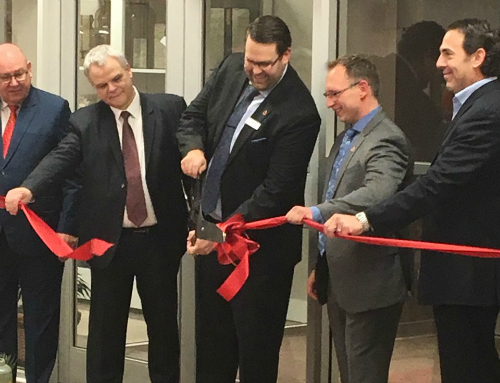 Reid, who is also a high-profile member of Mega Group, told Home Goods Online that the new Ashley HomeStore will complement his family’s higher-end store, Reid’s Furniture, which he describes as essentially a La-Z-Boy Furniture store without the sign – although they do carry other brands such as Canadel, Durham and Buhler, to name a few.

“We’ve been buying Ashley since I was a kid,” Reid said, noting his family has enjoyed a long association with the manufacturer and now that he’s in charge, he’s been looking for new ways to grow the business. He believes the combination of Ashley’s “what you see is what you get” approach and the main store’s emphasis on custom and tag orders should give the business wide appeal to Thunder Bay and area consumers.

The Thunder Bay market is more competitive than one would immediately think. Both Leon’s and The Brick have a presence as do a number of other big ticket retailers, including Dufresne Furniture & Appliances.

The Ashley HomesStore will be staffed by an experienced crew including all of the employees from the former Reid’s Liquidation Centre, as well as four others including some who worked at the recently closed Sears Canada store in Thunder Bay. Additional warehouse, delivery, and service personnel have also been added. The company now employs about 24 people in total.

“It is a very exciting time for Reid’s as a company,” store manager Mat Allan said. “This partnership with Ashley Furniture will allow us to offer the same great service that our customers have come to expect, with an even larger variety of affordable furniture that will look great in any space.”

In all, Ashley operates more than 750 Ashley HomeStores in 36 countries. The company’s Canadian store count is estimated at 50.