OTTAWA – While home sales via its Multiple Listing Service (MLS) rose slightly in September when compared to August, they fell significantly on a year-over-year basis, according to the latest figures from the Canadian Real Estate Association (CREA). However, the average price continued to climb as the market tightened with fewer homes being listed for sale.

The realtors’ group said sales gained 0.9% on a month-over-month basis in September, the first such uptick since March while they fell 17.5% from the record level set in September 2020.

“September provided another month’s worth of evidence from all across Canada that housing market conditions are stabilizing near current levels,” CREA chairman Cliff Stevenson said in a statement. “In some ways that comes as a relief given the volatility of the last year-and-a-half, but the issue is that demand/supply conditions are stabilizing in a place that very few people are happy about. There is still a lot of demand chasing an increasingly scarce number of listings, so this market remains very challenging.” 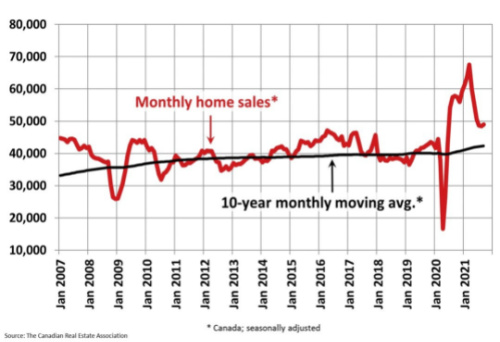 “The small changes observed in most key housing market metrics over the last couple of months suggest that the worst of the pandemic-related volatility we’ve experienced since last spring is in the rear-view mirror at this point,” CREA senior economist Shaun Cathcart noted. “Having said that, given we are still stuck at around two months of inventory nationally, the thing to keep a close eye on going forward will be the behaviour of prices. While the acceleration in home prices we saw in September was more than most would have expected, the fact that prices are now moving back in that direction is not surprising.”

The number of newly listed homes fell by 1.6% in September compared to August, as gains in parts of Quebec were overwhelmed by declines in the Lower Mainland, in and around the Greater Toronto Area and in Calgary.

Based on a comparison of sales-to-new listings ratio with long-term averages, a small but growing majority of local markets are moving back into seller's market territory. As of September, it was close to a 60/40 split between seller’s and balanced markets.

There were 2.1 months of inventory on a national basis at the end of September 2021, down slightly from 2.2 months in August and 2.3 months in June and July. This is extremely low and indicative of a strong seller’s market at the national level and in most local markets. The long-term average for this measure is more than five months.

Excluding the Greater Vancouver Area and the GTA – this country’s largest, most active and most expensive housing markets – from the calculation cuts more than $146,000 from the national average price.

In her research note, Rishi Sondhi of TD Economics didn’t seem all that surprised by CREA’s report on the housing market in September.

“The correction in sales from the unsustainable levels achieved earlier in the year is likely over and September should mark the beginning of a modest positive trend in sales activity,” she remarked. “The key word here is modest, as interest rates are likely to grind higher moving forward, playing off against improving job markets, a rising population, and the decision by some households to plow excess savings into down payments.”

However, she did point out that September’s jump in the national average price was twice the long-term average. In fact, she expects price gains to display stronger growth than sales because the market remains, as she put it, “drum tight.”