As has been their practice for the past 14 years, company co-founders Albert Marrache and Dawn Rowe led their team members on a shopping spree that netted some $40,000 in toys, bicycles and games to be given to children throughout this community east of Toronto, where they house their head office.

On the morning of December 15, a caravan of vehicles – escorted by members of the Durham Region Police Service – delivered the goods to the Clarington Fire Department, who distributed the donation in collaboration with the local branch of the Salvation Army. 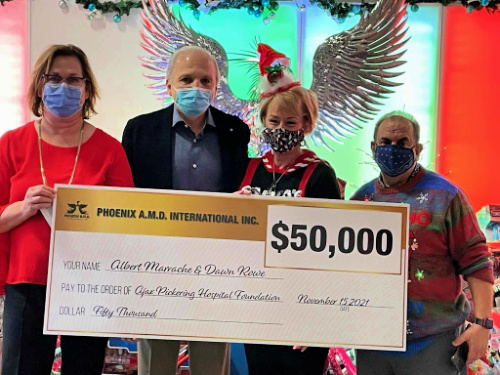 Shortly thereafter, as a result of a promotion featuring the Excelsior brand of laundry detergent, Phoenix donated $10,200 to Simcoe Hall Settlement House. Based in Oshawa, Ontario, this organization provides a variety of services to residents of that city including a food bank as well as an after-school and summer camp programs for children.

Phoenix AMD also gave a total of $52,000 to the Ajax-Pickering Hospital Foundation, an organization it has supported since 2015 when it became a lead sponsor of the annual Mayor’s Charity Golf Classic.

“This new model will be connected to the new patient information system that was just introduced at Lakeridge Health, called EPIC. The unit requires the staff to scan in to operate it, requires patient information to be entered and only opens the draw(s) with the exact medications that are required, which are also scanned to inputted into the patient’s record,” she said.

The other $2,000 was earmarked for the foundation’s staff health and wellness activities. “As you can imagine,” Collins said, “the hospital staff are tired, and we are going around with treats and some quick fun activities to try and lift their spirits and to make sure they know they are appreciated.”

In prior years, Phoenix has purchased an incubator for the hospital’s neo-natal intensive care unit (NICU) as well as panda warmers for the labour and delivery unit. They have also supported the hospital’s mental health efforts by becoming Secret Santas, buying items on patient wish lists ranging from boots and coats to cleaning products and Tim Horton gift cards.

In 2019, the foundation presented its Howard Sokolowski Award to Marrache and Rowe in recognition of their contributions.

In a profile HGO published five years, when Phoenix celebrated its 25th anniversary, the partners admitted they give away much of the company’s profit each year.

“We donate a significant portion of our net profits to the community and what we don’t donate, we re-invest in the company,” Albert Marrache explained at the time. “We don’t have a killer instinct and are givers not takers.”

Both believe it’s almost a moral imperative to give back to the community.

The most public event held in recent years was the Wounded Warrior promotion held in honour of two members of the Canadian Armed Forces who were assassinated by two extremely distributed individuals in late 2014. Altogether over two campaigns, the effort raised almost $100,000 which was divided between two organizations dedicated to aiding wounded veterans and their families: True Patriot Love in Canada and Wounded Warriors Family Support in the U.S.

Another beneficiary of their largesse has been the Maurice Tanguay Foundation, operated by one of their largest retail partners – Ameublement Tanguay – and dedicated top assisting handicapped children throughout Quebec. They also give regularly to women’s shelters, the Children’s Wish Foundation, the Breast Cancer Foundation as well as the Heart & Stroke Foundation.

“We’ve always tried to give back,” Marrache says. “We don’t do it for publicity. We do it because it needs to be done.”