AJAX, Ontario – The founders of Phoenix AMD International, Dawn and Albert Marrache, were recently named as the 2019 recipient of the Howard Sokolowski Award by the Ajax-Pickering Hospital Foundation’s board of directors.

“This year, we are presenting the award to a pair of people who both are really are true examples of philanthropists,” Jennifer R. Collins, the foundation’s director of philanthropic operations, told Home Goods Online in a statement.

The Howard Sokolowski Award was created to recognize an individual, group or company in the community that has devoted their time, shared their network of contacts and committed their financial resources to benefit the Ajax Pickering Hospital. Although now based in nearby Bowmanville, Ontario, when the added value resource was founded 29 years ago, it made it’s home in this community just east of Toronto. 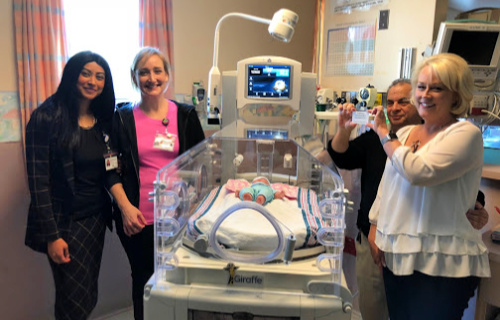 “Leading by example and with their hearts, these two people and their employees have enthusiastically taken on community fundraising with a passion,” she added, “They have made significant gifts to Ajax Pickering Hospital and encouraged their employees and the community to do the same.”

Collins noted Phoenix AMD International has been a major sponsor of the foundation’s galas and tournaments, but their giving goes beyond ticket purchases. “For example, at the 2016 Pickering Mayor’s Gala, when they noticed that we had many auction items unsold, they purchased every one of them (sight unseen) so that we would make our budget,” she said. “And in 2018, at that same gala, they purchased 20 gift bags so we wouldn’t have any left unsold!”

She also cited another example of the pair’s commitment. They learned a week before Christmas in December 2017 that several clients of its social services department needed new boots and clothes. “The next day, they went out and purchased 15 new pairs of boots and complete outfits and delivered them to the hospital.  And they accompanied this delivery with some strong words: ‘if you have patients in need, call us immediately!’ And, thus, they quietly purchased all the clothing needs for the mental health clients the foundation was supporting through its 2018 Secret Santa program.”

Phoenix AMD also made a significant contribution to the hospital’s pediatric department, purchasing a Panda baby warmer and a Giraffe baby incubator. They also issued a challenge, pledging they would match every donation made by the community dollar-for-dollar, which led to the purchase a second incubator.