OTTAWA – Preliminary data published by Statistics Canada shows furniture, home furnishings and electronics and appliance store sales plummeted by a collective and staggering 48.6% in April 2020 over the same month a year earlier. This was due to the simple fact the majority of the industry’s brick-and-mortar outlets were shuttered as part of the strategy to defeat and contain the spread of the COVID-19 pandemic, which has taken over 8,400 Canadian lives as this story went online.

For comparative purposes, it should be noted furniture, home furnishings and electronics and appliance stores in the United States saw their collective sales dive 65.4% during the same month.

Furniture, home furnishings and electronics and appliance stores make up one of the 11 key sectors covered in Statistics Canada’s Monthly Retail Trade Survey (MRTS). The only sector showing an uptick for April were food and beverage stores, whose sales climbed 12.4%. 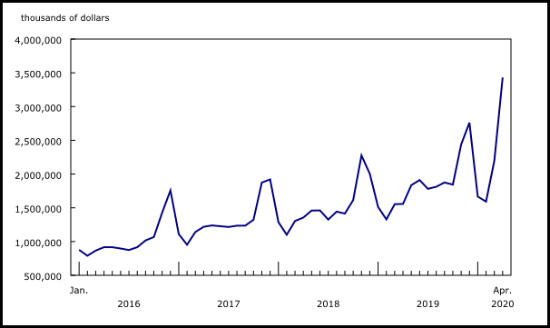 The agency also reported during April, some 46% of all furniture and home furnishing retailers – as well as 44% of all electronics and appliance retailers – operating brick-and-mortar stores in Canada were shuttered as part of the shelter-in-place orders issued by provincial governments and health authorities across the country. Depending on where they were located, these stores were closed for an average of 20 business days, its industry survey revealed.

For the first four months of the year, furniture stores sales (including mattress specialists) totalled $2.74 billion, down 22.5% from the same period of 2019.

Meanwhile, home furnishing store sales – which sell everything from accent and occasional furniture to decorative accessories, lamps, lighting and floor covering – rung-up preliminary sales of $218.7 million in April, down 62.9% from the revised $589.9 million for March and a 48.1% decline from $421.0 million for April 2019.

For the year-to-date, home furnishing store sales were tallied at $1.58 billion, down 25.3% from the $2.12 billion recorded for the same period last year.

Statistics Canada reported for the January to April period, these merchants had total sales of $3.56 billion, a drop of 11.7% from the $4.03 billion for the same period last year.

Big ticket home wasn’t the only segment of the MRTS to show significant declines for the month of April as Statistics Canada noted all location-based retail saw a sales drop of 32.8%, led by the auto segment whose collective declines totalled 62,1% for the month.

Its worth noting that all three publicly held Canadian full-line furniture retailers – Leon’s Furniture Limited, Sleep Country Canada Holdings and BMTC Group – all report significant jumps in their online business during the pandemic-imposed shutdown of their stores.

While most analysts agreed the picture for April was bleak, there were signs of life at retail as the economy began to re-open across the country at the beginning of May.

“As expected, social distancing efforts and mandated closures in the face of COVID-19 drove the largest decline in retail sales on record,” Ksenia Bushmeneva of TD Economics said in her research note, adding, “However, advance estimate for May suggests that the worst is behind us with consumers eager to return  to stores after months of hibernation and delaying purchases.”

She was also quick to caution that consumer spending is expected to differ dramatically from the pre-pandemic period. “Consumer spending patterns have undergone quite the transformation in recent months,” she pointed out. “As expected, consumers are spending considerably less on travel and lodging, eating out, gasoline and clothing, but considerably more on home renovation and food. Online shopping also continues to rule the day, remaining far more prevalent than it was prior to the health crisis.”

The question is how strong the recovery will be once the drivers of current activity – pent-up demand, re-openings, and government support programs – fizzle out. Once they do, Bushmeneva maintains consumer spending will recover at a much more gradual pace.