WINNIPEG, Manitoba – In a long-anticipated announcement, Palliser has confirmed the expansion of its manufacturing operations both here and in Matamoros, Mexico, is well underway. When completed the project will increase total North American production capacity by at least 30% while adding more than 700 positions to its corporate workforce.

The family owned and operated upholstery manufacturer is adding 130,000 square feet to its campus here, with completion scheduled for the end of the second quarter of the year. It will create as many as 400 jobs over the next 18 months or so.

In an interview with Home Goods Online from the company’s High Point Market showroom, Palliser president and chief executive officer Peter Tielmann said a number of factors went into the decision to launch the expansion. 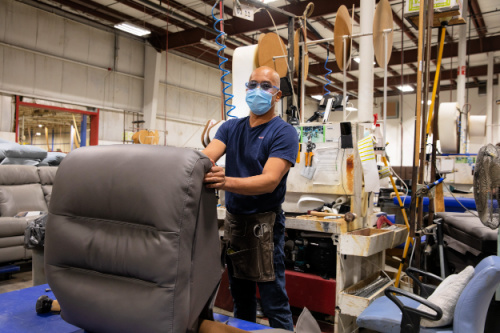 “In Canada, the industry has enjoyed greatly increased demand during the COVID pandemic,” he noted, adding, “We’ve also seen increased business since the tariffs (on motion and leather furniture from the People’s Republic of China and Vietnam) were imposed.

“All of these things gave us the confidence to invest in Canada,” he continued, “especially since the government now seems willing to do what it takes to defend domestic manufacturers from unfair foreign competition.”

In addition to the new building in Winnipeg, Palliser is also investing a considerable amount in new equipment and technology, which will be employed to heighten its capacity to customize its product to the consumer’s desired specifications. “Automation is the key to making everything work,” Tielmann said, noting that like most other Canadian furniture makers, Palliser can’t find sufficient numbers of talented people to add to its workforce.

That’s why Palliser is working closely with the Manitoba government to develop a program that will bring qualified immigrants to the province.

Meanwhile, at its Matamoros campus, Palliser has converted a former warehouse into a product facility that will house another 300 employees.

To keep up with increased demand and to serve its retail customers in the United States better, Palliser’s two other Mexico-based manufacturing facilities have increased capacity by adding additional shifts, creating 160 new manufacturing jobs.

While he didn’t reveal a precise figure, Tielmann told HGO Palliser’s investment in this expansion project is valued “in the tens of millions of dollars.”

“This investment is our commitment to growth in the North American market,” he said. “We’re eager to create new jobs right here in Manitoba, where our business is anchored, as well as in our Mexico facilities that primarily support our U.S. customers. It’s important for us as a company to continue to produce domestically, which reduces our environmental impact by lowering our emissions and carbon footprint.”

A response to increased demand and opportunities for growth, this expansion utilizes innovations and a cellular approach to manufacturing which will improve efficiencies and Palliser’s leadership in exceptional quality and value in the furniture industry.

“We are dedicated to providing retailers and consumers with personalized, made-to-order products our customers have come to appreciate over our nearly 78-year history,” says Tielmann. “We are proud of our success, which we attribute to personalization, as well as our commitment to style, and dedication to comfort, quality and sustainability.”