The Canadian Furniture Show (CFS), this country’s only national furniture trade event has had its ups and downs over the past few years but attending industry professionals – and exhibiting resources – seem to firmly believe it is set to evolve once again by returning to its roots as the first such happening of the year beginning just a few months from now.

The 2019 edition was certainly a more slender affair than attendees are used to. Held as always at the International Centre in Mississauga, Ontario, it boasted a little over 130 exhibitors, which included such stalwarts as Brentwood Classics, Collection Tuff Avenue, Crate Designs, Dynasty Furniture, Julien Beaudoin, and Superstyle Furniture, among others. And while the more petit show may have been was light on display booths, it proved to be heavy on style.

Stylish offerings aside, the weekend-long show did underwhelm in some respects. While some attendees might have appreciated having less ground to cover, others missed the star-studded talks and workshops that make the event a little glitzier (designers and television personalities Steven Sabados and Sarah Richardson have both appeared at CFS in recent years).

But despite the more limited selection of vendors and lack of star power – which can be attributed, at least in part, to the fact that the next show will take place a few short months from now in January 2020 – buyers and exhibitors alike seemed optimistic the show’s return to its more traditional winter time slot will mean more vendors, a larger array of solid product offerings and better energy.

What did buyers think?
Measuring the success of a show usually involves gauging the reactions of buyers. If retailers and designers place a good number of orders for on-trend products, the show has done its job. This year, buyers seemed pleased by what they did see – even though there was less of a selection to peruse. 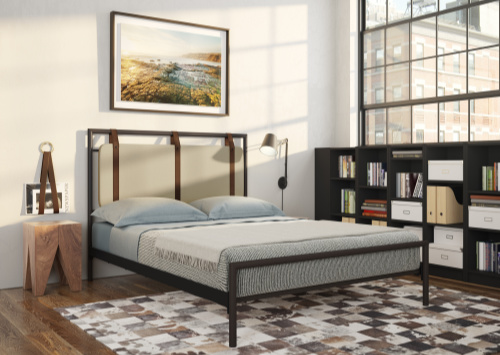 “We’re seeing fabulous looking product and we always enjoy seeing the very latest in colour and decor, but there’s less of it,” says Lani Lorenz, sales manager for Smitty’s Fine Furniture, an independent two-unit furniture retailer based in Hanover, Ontario.

“We’re always satisfied with the products that we sell, and that’s our Canadian-made pieces. So of course, what we’ve seen is beautiful, it’s great to see something new,” she noted.

When asked about the upcoming switch to January shows, Lorenz is optimistic the show will fare well. “I’m looking forward to it being back in January when it’ll be full, and we’ll be seeing everything for the year coming up. Sometimes the show has speakers, but we don’t really have time to go to that. We’re always looking for the latest decorating trends.”

Other buyers agreed those vendors who exhibited at CFS 2019 brought worthwhile and attractive products with them.

“We think that there are some really nice and interesting pieces of furniture,” says Lynn McMillan, an interior designer and owner of Gem Home Staging and Designs, based in St. Catharines, Ontario. “For me, this is furniture that I’ve seen before, but I’m looking for something that’s more current [and the selection is] pretty good. We look for manufacturers or companies in Toronto because we’re in Niagara, so it does it make it easier for us to come by and pick up what we’re looking for.”

McMillan said that she and her team were hunting for trendier pieces and are planning to visit other shows throughout the year, including the Las Vegas Market, which will be held at the end of July. And while she hadn’t been at CFS for long at interview time, she was excited to evaluate the more stylish pieces on offer.

“We’re looking for more current stuff, which is why we’re here – to see what’s up and coming and what’s out there now instead of buying stuff that’s been around for a few years.”

Buyers representing Lowe’s Canada, which has become a more aggressive player in furniture, home furnishings and major appliances in recent years, were also on the hunt for new products.

The next edition of the Canadian Furniture Show will be held at the International Centre in Toronto from 16 to 18 January, 2020.