TORONTO – In the second episode of One-on-One, HGO’s video series of conversations with people of note from throughout Canada’s furniture, mattress and appliance industry, Eddie Leon talks about his 45-year career working inside his family business, what leadership means to him, and the often-under-valued strength of the owner operated business.

Edward Leon – Eddie as usually called by his friends and admirers – retired as chief executive officer of Leon’s Furniture Limited (LFL), the company his grandfather Alban founded in 1909 – on Canada Day last year ending a career that spanned 45 years. 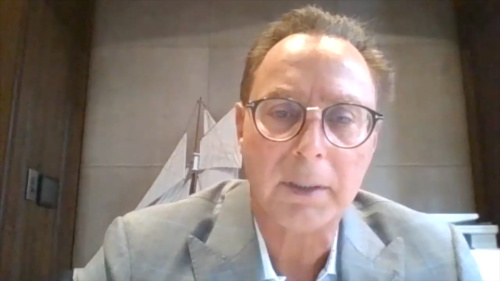 The conversation was far ranging covering everything from his daughter’s time as a member of Canada’s gold medal winning Olympic soccer team to what’s on his reading list and his love for the business his family has spent more than a century building.

Many furniture, mattress and appliance retailers exit the business by the time the third or fourth generation comes around because it members have found other interests and careers to pursue. But not Eddie.

“I was brought up in a generation where I was taught that hard work, dedication and passion were important to being successful in anything,” he told HGO publisher and editor Michael Knell, “and our fathers were very big in our own eyes and in our own minds. They stood out as giants.

“I looked up to my father and  my uncles very much and I think it was that sense of pride that initially drove me into wanting to follow in their footsteps and, frankly, once I started I never really looked back,” he continued, adding, “I always figured business was a passion I wanted to pursue and it made sense for me if I was going to do that, to do it in our family business as opposed to going out on my own.”

He also shared what he saw as the best part of serving as CEO of a company with sales in excess of $2.7 billion in 2020.

He acknowledges every CEO has to report to shareholders and their board of directors “but ultimately being able to make the decisions you believe and know to be right is certainly a great part of the job.”

Leon also gives most of the credit for his success to the people around him. “I enjoyed working with the wonderful people we’ve amassed over the years. We’ve got a great leadership team at the office and I like to think I was a big part putting it all together, so getting the chance to work with them was very enjoyable,” he said, adding, “That’s the part I miss the most.”

I hope you enjoy HGO’s conversation with Eddie Leon.