Home / Article: One on One: talking about reputation with Dave Scholz

One on One: talking about reputation with Dave Scholz

BRIGHTON, Ontario – Each year, Leger, the well-known Canadian marketing research and polling firm, surveys consumers from coast-to-coast about the reputations of those business with whom they do business. What’s amazing is that among the 288 companies mentioned on the 2022 ranking not one Canadian furniture or mattress retailer, manufacturer or distributor is mentioned.

In fact, only one appliance retailer made the list – Best Buy Canada even though, generally speaking they are perhaps better known for their expertise in electronics. Two appliance manufacturers also made the list, but once again, Samsung and LG are perhaps more closely associated in the minds of the typical consumer with their televisions, mobile phones and other electronic devices.

In this edition of One-on-One, I sit down with Dave Scholz, executive vice president of Leger and author of the survey about why this is and, more generally, what reputation means in a business context, how to determine what it is and how to improve it. 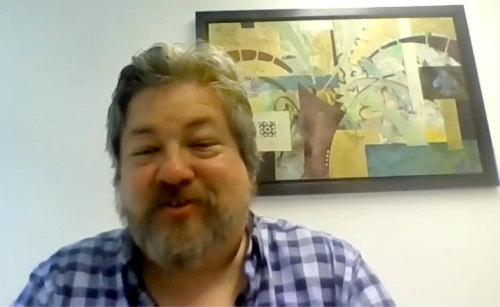 Ours was indeed an interesting conversation. We began at the beginning, defining what reputation means in a business context.

“From a business perspective, your reputation is one of those intangibles,” Scholz observes. “It isn’t how many stores you have or the amount you sell. Do they (the consumer) have a good impression of you, are you doing good things, are they connecting with you in a positive way. That’s really what reputation is about.”

The survey is conducted online these days. Scholz noted the survey respondents are asked open ended questions – “Please, tell us what companies you think have a good reputation.”

He notes many of the companies on the list have become part Canadian culture and have become associated with more than just the process of buying and selling. As an example, he cites Canadian Tire, a retailer seen in almost every facet of life in this country. “You see them as sponsors of sporting events…Canadian Tire has built of culture of being part of our community.”

It also scores well on the survey’s key drivers. Canadians seem them as financially strong, as delivering quality products, as socially responsible, as part of the community, as a good employer and, Scholz stresses, “we don’t hear a lot of bad things about them and when they have had problems, they’ve been open and honest about them but people are hard pressed to find any problems that Canadian Tire had.”

However, the iconic Canadian retailer – which is currently celebrating its centenary year – doesn’t score all that high on innovation, but that’s for a simple reason: “they haven’t changed much and that’s part of who they are.”

This is the 25th annual edition of Leger’s Reputation survey (click here to access). It reveals that after two years of uncertainty and change, overall reputation scores have dropped again this year. Shoppers Drug Mart is the most reputable Canadian company; however, their score is down five points from the year before. 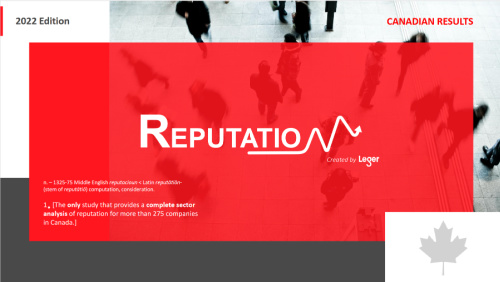 In the introduction to the survey, Leger noted “Although our Reputation study has observed many changes over the past 25 years, the most profound changes have occurred in the past 10 years. This year, the top 10 most reputable companies have an average score of 71 out of 100, with the highest scores (Shoppers Drug Mart and Sony) at 73. Ten years ago, the average score of the top 10 list was 83, with Google in the top spot at 91. This represents a 12-point average score drop in a decade.”

The survey notes five of the companies making the top ten in 2013 (Google, Sony, Shoppers Drug Mart, Canadian Tire and Samsung) still present in the top ten of 2022. Another three that were in the top 10 (Kellogg, Staples and Kraft Heinz) are still in the top 20, but the overall scores have decreased.

“Rather than an increase in bad opinion ratings (which have not changed on average), this phenomenon is driven by a drop in good opinion ratings and an increase in the percentage of Canadians who say they ‘know the company, but not well enough to rate it’,” the introduction observes. “This mirrors the change in reputation seen when a company goes through a crisis.

“Canadians don’t flip flop between good and bad opinions; rather, they allow companies a grace period wherein they are waiting to see what the companies will do next. Collectively, Canadian companies are experiencing a reputation crisis, and how they will respond is yet to be seen,” it continues.

Dave Scholz believes, “The challenge for companies will be to learn as much as they can about their stakeholders’ perceptions of them and look for ways to rebuild the relationships that have led to this decline in reputation. Canadians are open to feeling positive again, but what organizations do next will affect if these one-time positive perceptions can be rekindled.”

Click here to hear my conversation with Dave Scholz.