OTTAWA – Sales via its Multiple Listing Service (MLS) were steady in October over September but gained 12.9% over the same month in 2018, according to the latest figures from the Canadian Real Estate Association (CREA). Meanwhile, new listing fell 1.8% on a month-over-month basis and the national average sales price continued to advance.

The realtors’ group noted sales activity in October was almost 20% higher than the six-year low reached in February 2019 but remains 7% below the records set in 2016 and 2017.

It also reported there was an almost even split between the number of markets reporting gains and declines. For example, sales were up in Greater Vancouver (GVA), the neighbouring Fraser Valley and Ottawa. These were offset by declines in the Greater Toronto Area (GTA) and Hamilton-Burlington. 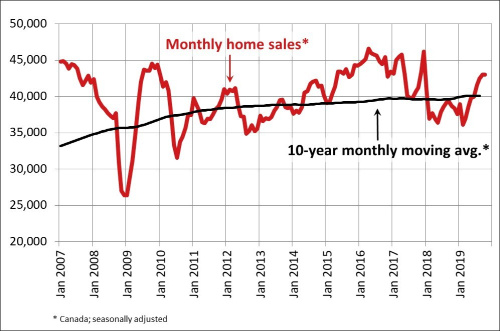 On an actual (not seasonally adjusted) basis, transactions were up from year-ago levels in 80% of all local markets in October, including all of Canada’s largest urban markets.

“Steady national activity in October hides how the mortgage stress-test remains a drag on many local housing markets where the balance between supply and demand favours homebuyers in purchase negotiations,” CREA president Jason Stephen said in a statement.

“It’s a full-blown buyer’s market or on the cusp of one in a number of housing markets across the Prairies and in Newfoundland,” added CREA chief economist Gregory Klump. “Homebuyers there have the upper hand in purchase negotiations and the mortgage stress-test has contributed to that by reducing the number of competing buyers who can qualify for mortgage financing while market conditions are in their favour.”

Steady sales and fewer new listings further tightened the national sales-to-new listings ratio to 63.7%, continuing to climb above its long-term average of 53.6%. Its current reading suggests negotiations are tilting in favour of sellers although there are significant regional variations.

The number of months of inventory represents how long it would take to liquidate current inventories at the current rate of sales activity. It fell to 4.4 nationally in October – the lowest level since April 2017 and continuing to decline from its long-term average of 5.3 months.

The actual (not seasonally adjusted) national average price for homes sold in October 2019 was around $525,000 – up 5.8% from the same month last year. Excluding the GVA and GTA, this country’s most active and expensive housing markets, the average falls to around $400,000 and reducing the year-over-year gain to 4.7%.

In her research note, Rishi Sondhi of TD Economics pointed out that October’s essentially flat performance came on the heels of seven straight month gains. “What’s more, sales are strong on a trend basis, with activity up 12.9% year-over-year,” she said, adding she continues to believe the housing market will contribute to the overall expansion of the economy.