OTTAWA – Home sales via its Multiple Listing Service (MLS) inched up 0.6% in November, notching the ninth consecutive monthly gain, according to the latest figures from the Canadian Real Estate Association (CREA). Sales were also up on an actual basis, as were prices as new listings fell month-over-month.

The realtors’ group reported that while activity stands 20% above the six-year low reached in February 2019, it remains approximately 7% below the records set in 2016 and 2017.

There was an almost even split between the number of local markets where sales rose and declined. Higher sales across much of British Columbia and in the Greater Toronto Area (GTA) offset a decline in activity in Calgary. 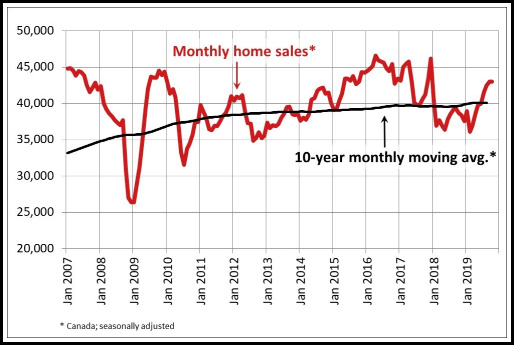 Actual activity was up 11.3% year-over-year in November. Transactions surpassed year-ago levels in almost all of Canada’s largest urban markets.

“Home prices look set to continue rising in housing markets where sales are recovering amid an ongoing shortage of supply,” CREA chief economist Gregory Klump said in a statement. “By the same token, home prices will likely continue trending lower in places where there’s a significant overhang of supply, perpetuated in part by the B-20 mortgage stress-test that continues to sideline homebuyers there.”

Driven primarily by a drop in the GTA, CREA said the number of newly listed homes slid a further 2.7%, putting them among the lowest levels posted in the past decade.

This has pushed the national sales-to-new listings ratio to 66.3%, well above the long-term average of 53.7%. “If current trends continue, the balance between supply and demand makes further home price gains likely,” the association said.

CREA is also warning there is a potential shortage of homes available for purchase across most of Ontario, Quebec and the Maritime provinces while the number available across the Prairies and Newfoundland & Labrador has swollen in recent months.

The actual national average price for homes sold in November 2019 was around $529,000, up 8.4% from the same month last year. Removing the GTA and the Greater Vancouver Area – this country’s largest and most expensive real estate markets – from the mix reduces the national average to $404,000 and reducing the gain to 6.9%.