BRIGHTON, Ontario – The winter issue of the Merchandiser asks a very serious question: what is your company’s pot policy? We then move on to a review of furniture, mattress and major appliance retailing in 2018 by reviewing the numbers and attempting to project what comes next as the New Year begins. We also celebrate the opening of a new furniture store in Fort McMurray, a town that’s still rebuilding after a national tragedy. That’s where we start, anyway. 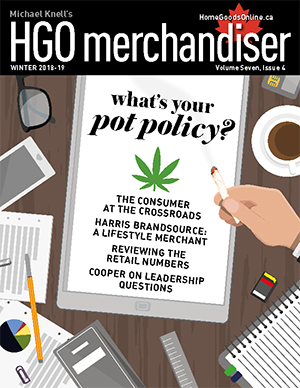 Legalising marijuana, as it’s more properly known, will change how furniture manufacturers, distributors and retailers manage their relationships with the people on their payrolls. This is something that was rarely discussed during the debate leading up to what will undoubtedly turn out to be the most drastic change in social policy and practise in the past several decades. Morneau Shepell, the highly respected human resources firm and the Ottawa-based Canadian Centre for Occupational Health & Safety have offered some sound advice on this issue. Several companies within the industry will also kind enough to share their approach the challenge.

Gary Harris wanted to be a lifestyle merchant. After losing his Sears dealer store, he teamed up with BrandSource to build what he firmly believes is a different kind of furniture and appliance store. The key was to study the market in and around Fort McMurray, Albert before construction even began. The resulting store was designed for an affluent customer who loves to cook, has a taste for finer furniture and wants a digitally augmented experience.

Tts obvious retail sales are cooling. The numbers clearly show it although since furniture store sales have enjoyed almost a half-decade of continuous growth – while setting a new high-water mark – it shouldn’t be all that surprising. At the same time, the retail environment is changing. But there remains plenty of opportunities for this country’s furniture and home furnishings retailers. In this issue, we present an overview of the numbers with an analysis of what they mean. We also offer a short-term forecast.

Also of interest is our conversation with Cory Renner of the Conference Board of Canada, the man in charge of the its Consumer Confidence Index. He believes the Canadian consumer is at a crossroads as higher debt levels and increasing interest rates are going to prompt her to rethink how she spends her money – and that will have a direct impact on furniture, mattress and major appliance sales going forward.

Donald Cooper, our resident retail guru, have interesting things to say about leadership. Owning a business requires leadership, which is a job all by itself with clearly defined responsibilities. He describes in detail the five jobs every leader needs to do, while outlining the four questions he or she must ask of everyone on the team.

We hope you enjoy the read.