BRIGHTON, Ontario – The Winter 2017 edition of the HGO Merchandiser is ready for download and, even if I say so myself, it may be one of the best issues the team working with me has ever put together. There’s a lot going on in our industry right now, but most it is happening in ways that are decidedly outside of our industry’s historical norms.

Granted, there is the discussion about the demise of Sears Canada – entitled Punch in the Gut – which was the result of a number of discussions I had with people who either worked for the soon-to-be defunct multi-channel retailer or were close to it in other ways. Most people agreed that happened was unnecessary, it was basically an act of avarice – the company had so many assets it didn’t fully exploit (at least, that how it looks to those on the outside) – and it’s their loyal employees and their pension fund that’s going to pay the ultimate price for this fiasco. 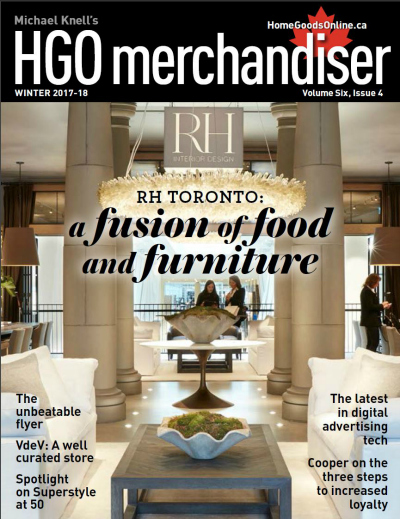 The flyer remains most retailers’ favourite advertising medium. But like everything else, they’ve changed and evolved in recent years, thanks to the dawn of digital. Ashley Newport, our steadfast contributing editor, researched our report and gives plenty of insight into the future of the flyer.

In this issue, Ashley profiles Fanny Vergnolle de Villers of VdeV, an independent retailer with stores in trendy districts of Montreal and Toronto who has a unique approach to selling furniture. While vintage/industrial is her style niche, it’s how she blends the rest of her assortment – which covers the gamut from kitchenware and cutlery to women’s fashion accessories – to create a unified statement that makes her successful and worth knowing about.

On the other hand, we also take a look at the opening of RH Toronto at that city’s Yorkdale Shopping Centre. The publicly-held merchant formerly known as Restoration Hardware is fusing food with furniture to create a unique shopping experience. In addition to its usual array of high-end upholstery, case goods and accessories, its 70,000 square feet is also home to the latest fare from one of the hottest chefs in the United States today.

We also drop by and take part in the festivities at the recent annual general meeting and convention held in honour of the 75th anniversary of the Quebec Furniture Manufacturers Association.

Speaking of advertising, Greg Simpson – a new contributor to HGO – introduces us the MyPixel, a new technology developed by District M of Montreal. Basically, this new computer application allows a retailer to follow a consumer who has visited his own web site as she journeys through cyber space, posting the occasion encouraging her to return.

Meanwhile our resident retail guru, Donald Cooper shares his three tried and true steps to increased customer loyalty. It’s all about defining yourself by what you do to solve your customer’s problems.

Finally, we turn our spotlight on the Toronto-based upholstery specialist Superstyle Furniture, which celebrated its 50th year in business under second generation president and chief executive officer Danny Colalillo in 2017. The secret to its success is simple: building a well-designed, quality product at a good price and then supporting it with excellent service. The formula should also see it through its next half century.