SASKATOON, Saskatchewan – Canadian retail veteran Kim Yost has been named president and chief executive officer of Mega Group, the co-operatively owned buying and marketing group based here. He will assume his new post on 20 November 2019, succeeding Benoit Simard who announced his retirement earlier this year.

Until June 2018, he has spent almost a decade as president and CEO of Art Van Furniture, one of the largest furniture retailers in the United States. Before that, he was with The Brick Group (now a subsidiary of Leon’s Furniture Limited) from 1997 to 2009, the last five years of which as president and CEO. 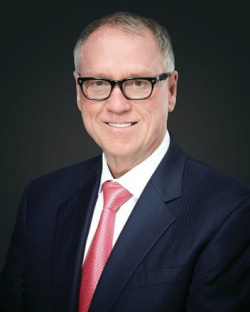 In a letter to his fellow shareholders, Richard Wall, chairman of Mega’s board of directors, hailed Yost as “an accomplished North American retail industry business leader who has consistently delivered innovation and performance improvements. He has a history of achieving business goals through his ability to assess the reality of the current business coupled with the vision to see its potential.

“Kim Yost has over three decades of recognition for extraordinary achievements and business success that come from proven leadership, customer focus, strong financial acumen, and intense focus on aligning an organization against a vision,” he continued, adding, “He has had consistent success in acquiring and developing top-tier human capital, managing large scale complex financial models and approving initiatives with risk that challenge the status quo. He fundamentally believes in building outward looking business strategies that equate customer service excellence with attaining retail market leadership positions.”

Wall also noted during his tenure with Warren, Michigan-based Art Van Furniture – which operated some 194 stores, most in the U.S. mid-west – Yost and his team tripled the retailer’s sales from US$375 million to US$1.3 billion. As CEO of The Brick, he responsible for the company’s day-to-day operations.

Kim Yost is also a business author with numerous books to his credit, including Maximum Pumptitude; Pumptitude: Pump Up Your Attitude and Gain Altitude; and, Internal Pumptitude: Inspire, Grow and Become More, to name a few.

Although currently living outside of Victoria, British Columbia, Yost and his wife will relocate to the Montreal area he will be working out of the group’s office in Boucherville.

As president and CEO, Yost will report to Mega’s board of directors and will provide overall leadership and direction for all aspects of its operations.

Wall also applauded Benoit Simard for more than two decades of service to Mega, having joined the organisation following the merger of what was then V.I.P. Stores and Ameublement B.V. ltée in 2000. He has been CEO since April 2008.

“The board believes that although we will miss Benoit’s leadership, this is a great opportunity for Mega Group to be associated with a new CEO who will bring such a great set of skills and successful business experiences,” Wall told shareholders. “We are committed to Mega’s evolution and are confident that we have found the right leader that will continue to deliver on the success of our strategic plan.”

He also announced there will be an official retirement presentation to Simard and an official introduction of Kim Yost at the group’s convention, which will be held as part of the AVB Summit at the Venetian Hotel in Las Vegas from 08 to 11 March 2020.