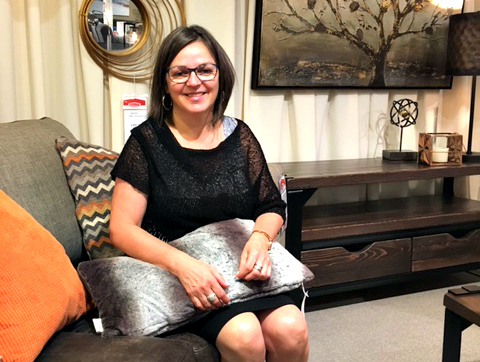 Sylvie Viel, the 2017 RSP Award winner for Atlantic Canada, is seen here at the store where she works as a sales associate, Ameublement BrandSource Rice in Edmundston, New Brunswick.

EDMUNDSTON, New Brunswick – When Sylvie Viel, a veteran sales associate at Ameublement BrandSource Rice traveled to Toronto to receive the Retail Sales Professional Award (RSPA) for Atlantic Canada, she was the only exclusively Francophone recipient.

But that didn’t stop her from mingling and sharing a moment with fellow winner Ruth Parkinson – of Executive Furniture Rentals and the award winner for Ontario – over a shared taste in footwear.

Viel was one of four regional recipients saluted by the first annual RSPA, which is sponsored by Zucora – the London-based added value service provider – and three other industry insiders, including Home Goods Online (HGO), the Canadian Home Furnishings Alliance (CHFA) and the Canadian Furniture Show (CFS). The award recognises the outstanding achievements and accomplishments of experienced sales professionals working on the floors of furniture, mattress and major appliance retailers across the country and seen as leaders when it comes to delivering exceptional customer sales and service.

Since the award isn’t an easy one to win – salespeople from across the country were nominated for the honour by their managers or peers – locking down for one designated for Atlantic Canada is impressive and very worthy of celebration.

“I was so proud, excited and privileged,” Viel told HGO through an interpreter (she speaks French exclusively), to discover she had been nominated and, eventually, selected. She was even more thrilled to have been recognised for her hard work.

“I was honored, it felt like recognition of all my hard work for the last 28 years in customer service,” she says.

Viel accepted the honour at the CHFA annual gala, which was held just prior to the opening of the 2017 Canadian Furniture Shore – an event that attracted winners from as close as North York and as far as Kelowna, British Columbia.

As for what compelled her employer and manager, Jim Rice – the owner of Ameublement BrandSource Rice, which is located in Edmundston, New Brunswick – to nominate her, he says it has a lot to do with her drive to go over and above.

“Sylvie consistently strives to achieve more than is asked of her,” he wrote on her nomination form. “She was one of the top sales associates with a competing retailer for 10 years until she switched over to our team in March 2016.”

He also noted that Viel is incredibly dedicated to improving the store and increasing its performance and has gotten tangible results. “In 11 months, our overall performance has improved by over 50%,” he wrote.

Click here to read Ashley’s complete profile of Sylvie Viel, the 2017 RSP Award winner for Atlantic Canada in the Fall issue of the HGO Merchandiser…