Home / Article: May home sales on the rise

May home sales on the rise

OTTAWA – The pandemic continued to negatively impact this country’s housing market in May, as actual sales through its Multiple Listing Service (MLS) was down 39.8% over May 2019, according to the latest figures from the Canadian Real Estate Association (CREA). However, both sales and new listings were up on a month-over-month basis from April.

The realtors’ group noted national homes sales were up 56.9% and the number of newly listed properties gained 68% in May over April – which was the weakest month of April for the resale housing market on record. May’s gain, they added, only constituted a one-third of the activity lost between February and April.

May 2020 sales were the lowest recorded for that month since the mid-1990s. Home sales for the year-to-date, were down 17.6% nationally. 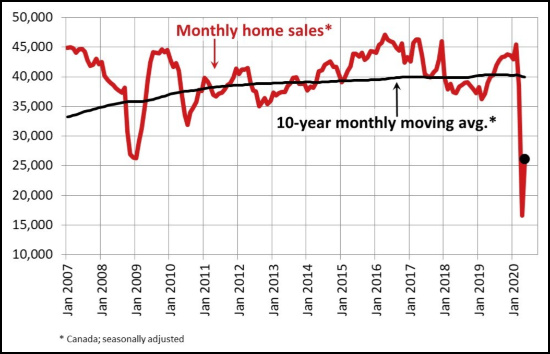 “May’s housing numbers are certainly a mixed bag of results – sales and new listings are both way up month-over-month but still way down compared to year ago,” CREA senior economist Shaun Cathcart said in a statement. “The big picture is things are moving in the right direction but still have a long way to go. That said, under the surface those numbers have been steadily rising from mid-April right through the first week of June, so June may end up a similar story. With sales and new listings moving down and now back up in tandem, and overall supply still falling, prices appear to be holding firm at this point.”

The national sales-to-new listings ratio – a key measure of market balance – fell to 58.8% compared to 63.3% posted in April. While this statistic is lower, CREA suggests the bigger picture is little changed considering the extent to which current economic and social conditions are impacting both buyers and sellers.

The number of months of inventory – the other key measure of market balance – fell from 9.0 months in April to 5.6 months in May. CREA notes April’s temporary jump reflected the view that sales were expected to fall immediately once the lockdowns were in place, while other variables like active listings would fall at a slower pace. “Anecdotal evidence suggests many sellers who already had homes on the market before mid-March may have left the listings up for now but drastically curtailed the extent to which they are actively trying to sell during the lockdown,” the association noted.

The actual (not seasonally adjusted) national average price for homes sold in May 2020 was $494,500, down 2.6% from the same month last year. Removing the GVA and the GTA – this country’s two most active and expensive housing market – trims the average price to $401,000.

In her research note, Rishi Sondhi of TD Economics, attributed the surge to “a wave of pent-up housing demand was unleashed in May, as every province eased social distancing measures (albeit to varying degrees).”

While the gains will probably carry on into June, she remains cautious about the housing market over the longer term.

“With the level of activity still at multi-decade lows, pent-up demand is likely to fuel additional gains for at least another few months,” Sindhi said. “The big question is what happens after this initial burst. Our expectation is that softer population growth, a slow recovery in job markets and CMHC tightening measures will moderate growth in sales and prices towards the latter part of the year and into 2021.”