QUEBEC CITY – Maurice Tanguay, perhaps this province’s most prominent full-line furniture retailer, philanthropist and well-known figure on its junior hockey scene, passed away at the age of 87 on February 25, 2020.

He founded the now 12-unit Ameublements Tanguay in 1961. The company’s stores are all located in the regions surrounding Quebec City and currently employ some 500 people. A full-line merchant carrying furniture, mattresses, major appliances and consumer electronics, the retailer is also well-known for the highly contemporary architecture of the buildings that house its stores.

It also operates a four-store Signature Maurice Tanguay, a high-end contemporary furniture specialist named for the founder. The company was named Retailer of the Year in 2015 by the Canadian Home Furnishings Alliance. 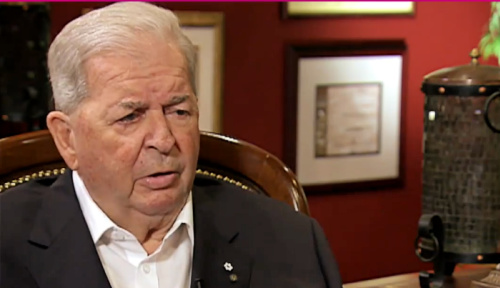 Since 1989, Ameublements Tanguay has been a subsidiary of BMTC Group, the publicly held retailer that also operates the Brault & Martineau and EconoMax banners in the greater Montreal area. Tanguay’s son, Jacques, currently serves as the company’s vice president and general manager and is an executive officer of the parent company.

In 1991, he created the Foundation Maurice Tanguay which is dedicated to raising money and providing support services for handicapped children and their families throughout Eastern Quebec. In recognition of his business and charitable achievements, he was named a member of the Order of Canada in 2001 and an officer of l’Ordre national du Québec in 2012.

A hockey enthusiast, he was inducted into the Pantheon des sports du Quebec as a builder in 2016, in recognition of his founding of the Rimouski Oceanic – a team which plays in the Quebec Major Junior League – in 1995. Maurice Tanguay's grandson, Alexandre, became its co-owner and governor in 2015 after wearing the team’s colours on the rink. His son Jacques, father of Alexandre, is also president of another, Quebec junior  team – the Quebec Remparts.

Originally from Saint-Philemon, in the Chaudiere-Appalaches region, the hockey enthusiast founded his first club at the age of 24, a junior team in Montmagny near Quebec.

Several notable names from across Quebec society and the sporting world paid tribute to Tanguay in the days following his passing.

On his Twitter feed, Quebec Premier Francois Legault offered his sympathies and said we would remember “his exceptional contribution to Quebec society.”

“I am saddened to hear of the passing of Mr. Tanguay, and I send my deepest condolences to his family during this difficult time,” Crosby said in a published statement. “While with Rimouski, Mr. Tanguay treated me like family…I am forever grateful to him and his family. He will be greatly missed.”

His passing was also noted by the Montreal Alouettes of the Canadian Football League, which thanked him for his support.

“The Alouettes would like to extend their deepest condolences to the Tanguay family, as well as all others affected by the passing of Maurice Tanguay,” the team’s statement said. “He played a crucial role in the rebirth of football in Quebec, with the launch of the Rouge et Or. His efforts and generosity have helped and positively influenced many athletes from our province, in football as well as many other sports. Rest in peace and thank you for everything.”