EDMONTON – Roger Anthony Podmore, who opened one of this country’s first mattress specialty stores in 1977, passed away here on 06 January 2018.

In a statement, his family described him as a “dedicated family man, a loyal son and brother and a respected businessman.”

Podmore had humble beginnings in rural Alberta where his father worked as a grain buyer for United Grain Growers while his mother raised him and his younger sister. 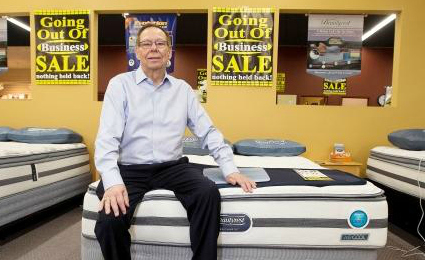 He opened Rogers Sleep Shop in 1977 – long before specialised mattress stores were commonplace and consumer purchased them at either department or furniture stores.  “This was the first one in Edmonton and I was the first person to run a sleep shop,” Podmore told the Edmonton Journal when he decided to close his two-store operated and retire in April 2015. “You didn’t know if you were going to have a hundred people in the first day, or two.”

Many industry observers have hailed Podmore as a pioneer, whose efforts led the way to mattress retail giants such as Sleep Country Canada, The Brick Mattress Store, and Mattress Mattress, among others.

“You either bought your mattress when you bought your bedroom suite at the department store or at a furniture store. It was just something that you needed,” he told the Journal. “But we brought in a specialty shop, which was something quite rare.”

“While Roger achieved great success with his company, it was equally as important to Roger that he created opportunity for his employees and their families; whether it be a gift for all the kids from Santa at the annual Fort Edmonton Park Christmas party or a helping hand to staff who needed guidance and support, family was incredibly important to Roger, whether it was his own or that of others,” his family said.

“Never one to seek out the spotlight, Roger also quietly supported multiple local charities and organizations in Edmonton. He consistently gave to those around him in any way he could and was always willing to lend a hand, or dollar, to those in need. Roger was gracious, down to earth and incredibly empathetic to all those he came in contact with,” they continued, adding, “Roger thoroughly enjoyed his four children and his seven grandchildren. Whether watching them in sporting events and dance recitals or helping out with babysitting, Roger was dependable as a father and grandfather, and was always willing to contribute; he took great pride in watching his family grow over the years.”

The family extends their heartfelt thanks to the staff at the University of Alberta Hospital’s hematology unit and Dr. Tiffany Van Slyke.

A Mass of Christian Burial was celebrated on Friday, 12 January at St. Joseph’s Basilica, Edmonton.