Since it now appears the worst of the COVID-19 pandemic is behind us, Mattress Mattress is looking to grow, melding the lessons learned during the recent tragedy with the disciplined approach the regional mattress and bedding specialist has employed to drive its success since its founding back in 1994.

The family-owned and operated retailer recently opened its 17th store in Red Deer – its second on the city where it got its start and a replacement for the unit it closed back in 2015. Eric Buchfink, Mattress Mattress (MM) founder, majority shareholder and chief executive, told Home Goods Online the company plans to open its 18th store in early 2023 in the Calgary neighborhood called Buffalo Run – right next to Costco. 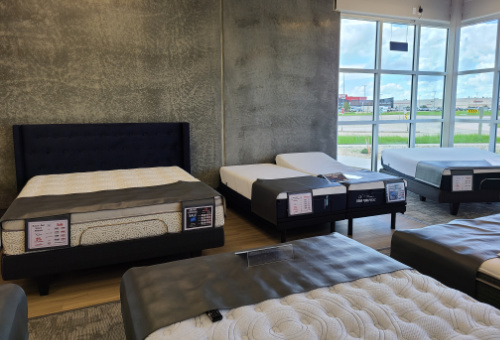 In chatting with Buchfink, it becomes obvious almost immediately here is a man who thinks about his business and whose surrounded himself with a more than capable senior management team which includes his sister, Lori Fecho, her son Matt (who, by the way, was HGO’s first National Retail Salesperson of the Year in 2017) and his son, Eric. Lori – who originally drafted the retailer’s well-known Beducation program – is MM’s vice president of human resources and Eric’s right hand. Matt is vice president of sales and marketing while Eric is vice president of operations and the company’s import division.

In a wide-ranging exchange with the writer, Buchfink detailed what sets Mattress Mattress apart from its competitors – it’s a combination of how they operate the business, how they manage relationships with their employees and how they interact with the customer. Everything they do is designed to improve efficiencies and, ultimately, make money.

Indeed, MM has documented almost aspect of its business, covering topics such as wide ranging as Appearance is Everything; 21 Ways to Sleep Better; How to Buy Radio and TV; Sales Rep Visits (governing visits from each vendor’s sales representatives) to Buying Criteria and Corporate Expectations.

Operating the business
Several things stand out about how Mattress Mattress operates. The first is its database, which was originally created by Eric’s brother Richard back in 1998 – before computers became common tools used by furniture and mattress retailers.

“It was then completely rewritten in 2005 and has been continuously updated by the software writer ever since,” Eric Buchfink said, adding the writer – who he describes as a “true software genius” and a minor shareholder – holds an important position where he is responsible for maintaining the database used by Alberta Health Services.

“Our database is totally tailored to our business,” he says, noting it creates “tons of reports, has a built-in re-order system and tracks inventory sales.”

“I’m also the guy that brough floor sample discounts to the mattress industry,” Buchfink claims. “No one ever asked before. Most recently, we’ve been able to take the normal 20% twice a year to 40% to 50% off all floor samples once a year from Canadian suppliers. We find that by using our disposable protectors on our mattresses, they stay fresh and clean for a year – and at 50% off, they clear quickly. And suppliers will often give us a new floor sample at another 50% off anytime the need to be refreshed sooner.”

While Mattress Mattress is loyal to its suppliers, they also demand a lot from them in addition to discounts on floor samples.

The retailer is a shareholder in Mega Group, the co-operatively owned buying and marketing group based in Saskatoon. “Although that gives us rebates and co-op funds that we’d be hard pressed to get on own, we’ve also been able to carve out some additional perks on our own,” he says, “such as contributions to our annual Christmas Party and golf tournament as well as additional co-op advertising funds and contributions to our website – and more.”