MLS sales up in December

OTTAWA, ON, Jan. 16, 2023 /CNW/ - Statistics released today by the Canadian Real Estate Association (CREA) show national home sales were up on a month-over-month basis in December 2022.

OTTAWA – While sales over its Multiple Listing System (MLS) were up in December 2022 over the previous month, they were down 39.1% on a year-over-year basis, according to the latest figures from the Canadian Real Estate Association (CREA). Both the number of newly listed properties and the actual national average sales price also declined.

The realtors’ group reports national home sales rose 1.3% in December over November, led by gains in Ottawa and Edmonton.

The actual (not seasonally adjusted) number of transactions in December 2022 came in 39.1% below the near-record level set for that month in December 2021.

“In 2022, we saw one of the biggest single-year shifts on record in Canadian housing activity, from record highs last winter to just below the 10-year average to end the year,” CREA chairman Jill Oudil said in a statement. “That said, the market's adjustment to higher rates may be mostly in the rear-view mirror at this point. That could start to bring buyers back off the sidelines this spring.” 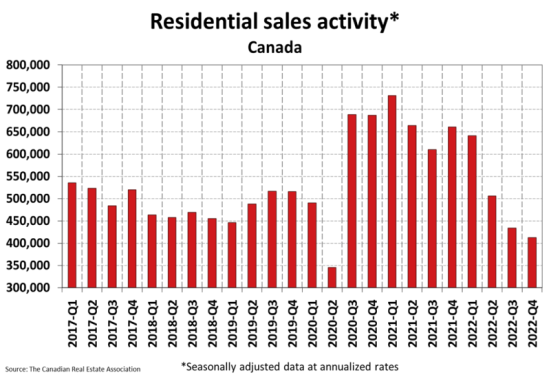 “The housing market story of 2022 was about high inflation and rising interest rates. The 2023 market will depend on the timing and extent those factors move back in the other direction,” CREA senior economist Shaun Cathcart observed. “Demand for housing continues to grow and supply remains the biggest issue across the entire spectrum. Whether that plays out in the rental market in 2023 or shifts back over into the ownership space is a matter of how quickly the Bank of Canada can get inflation under control and starts turning the dial back down on borrowing costs.”

The number of newly listed homes dropped 6.4% on a month-over-month basis in December, led by declines in British Columbia and Quebec. It was among the lowest December new supply levels on record.

With new listings down by quite a bit more than sales on a month-over-month basis, the sales-to-new listings ratio tightened to 54.4% compared to 50.2% posted in November. The long-term average for this measure is 55.1%.

There were 4.2 months of inventory on a national basis at the end of December 2022. This is close to where this measure was in the months leading up to the initial COVID-19 lockdowns, and still nearly a full month below its long-term average.

The actual (not seasonally adjusted) national average home price was $626,318 in December 2022, down 12% from the same month last year.

Excluding the Greater Vancouver and Greater Toronto areas – this country’s largest and most expensive housing markets – cuts almost $118,000 from the national average price.

In her research note, Rishi Sondhi of TD Economics, said December’s month-over-month sales hike coupled with a mild drop in prices came despite the Bank of Canada’s interest rate hike at the beginning of the month. This could signal that a “bottom in the housing market may be forming.”

She also doesn’t expect the two-year ban on foreign buying – which took effect on January 1 – to have much of an impact on the market although she’s interested in the effect a 25 basis point increase in the Bank of Canada’s interest rate will have.