OTTAWA – Home sales via its Multiple Listing Service (MLS) will continue to improve into 2020, with prices either continuing to rise or accelerating in most parts of the country, according to the latest updated forecast from the Canadian Real Estate Association (CREA).

In its opinion, CREA believes the economic fundamentals underpinning the housing market – such as population and employment growth as well as consumer confidence – remain strong everywhere in the country outside the oil-producing regions of the Prairies and Newfoundland & Labrador. “Additionally, the Bank of Canada is widely expected to not raise interest rates in 2020,” they noted. 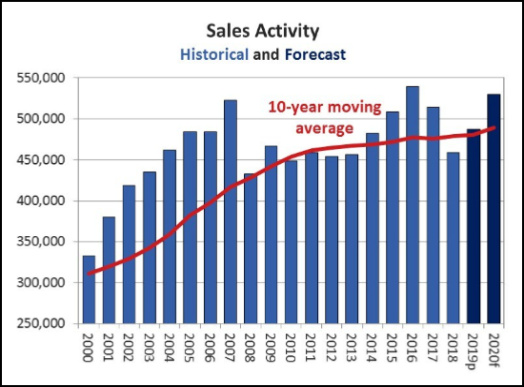 Mortgage rates have also fallen, influenced by the decline in the Bank of Canada’s benchmark five-year rate, which is used to qualify applicants applying for a mortgage. Also, the federal government’s new $1.25 billion shared equity program for first-time buyers has also aided sales.

The national sales trend improved better than expected over the second half of 2019 as new listings declined. This have tightened the market and reduced the inventory of homes for sale which in turn provided fertile ground for price gains. That inventory is now at a 15-year low.

CREA believes national home sales will number some 486,800 units in 2019, a 6.2% increase from the five-year low recorded in 2018. The small upward revision to CREA’s previous forecast reflects a stronger than anticipated uptick in activity in recent months in B.C., Ontario, Quebec and Nova Scotia.

However, on a per capita basis, the forecast for national sales this year is tied with 2008 and 2013 for the lowest since 2001.

Sales in British Columbia are expected to fall 2.3% year-over-year by the time 2019 is over, while those in Ontario and Quebec should be up 9% and 11% respectively.

National home sales are forecast to rise 8.9% to 530,000 units in 2020, which CREA believes is reflective of a weak start to 2019 rather than a significant change in sales trends over the forecast horizon. Most of that uptick will be contributed by B.C. and Ontario (selling a combined 30,000 of the anticipated 40,000 additional units) with the balance coming mainly from Quebec and Alberta.

The national average price is forecast to rise by 6.2% in 2020 to $531,000. CREA forecasts prices will suffer small declines in Alberta, Saskatchewan and Newfoundland & Labrador, coupled with solid gains in Ontario, Quebec and the Maritimes. In B.C., the average home price is expected to rebound next year following this year’s decline.

In a study published a few years back, CREA noted every home sold in this country generates some $6,500 in furniture and major appliance purchases over the following three years. This suggests sales of $3.44 billion for big ticket home retailers next year.