OTTAWA – Home sales via its Multiple Listing Service (MLS) continued to climb in August over both the prior month and on a year-over-year basis, statistics released by the Canadian Real Estate Association (CREA) have shown. The number of new listings was also up as was the average national price. However, observers caution a slow down is expected over the coming months.

Unlike the previous two months, the gains were recorded in only about 60% of local markets, particularly the Greater Toronto Area (GTA) and the Lower Mainland of British Columbia. 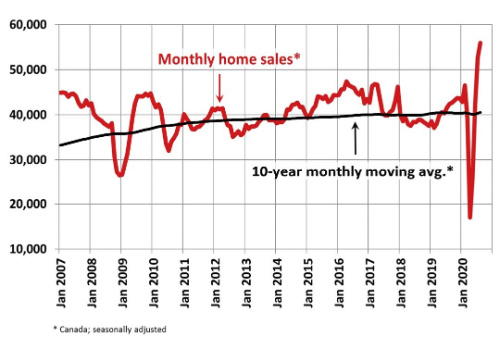 “It will come as a surprise to many that as of the end of August, home sales in 2020 had fully caught up to where we were at that time last year; however, that is somewhat of a low bar as the first half of 2019 wasn’t really anything to write home about,” CREA senior economist Shaun Cathcart observed.

“A more useful comparison would be to ask where are we now versus where we thought we’d be before anyone had ever heard of COVID-19, and on that score there is still a lot of catching up to do,” he continued, adding, “Despite some record monthly highs and lows this year, with eight months now in the books and activity showing signs of moderating in September, 2020 is looking like it will go down as a fairly middling year overall – weaker than in a non-COVID world but quite a bit better than we would have given it back in April.”

The number of newly listed homes posted a further 10.6% gain in August compared to July.

New supply was up in close to three-quarters of local markets, led by gains in the Lower Mainland, the GTA and Ottawa.

The actual (not seasonally adjusted) national average home price set another record in August 2020 at more than $586,000, up 18.5% from the same month last year.

Excluding the Greater Vancouver Area and the GTA – this country’s largest and most expensive housing markets – reduces the national average to about $464,000.

In his research note, Brian DePratto of TD Economics questioned how much longer these upticks in the housing market will continue.

“Canadian resale housing markets defied gravity again in August, with sales activity not just exceeding, but rocketing past the pre-pandemic pace,” he observed. “There are a number of reasons why this has been the case, including low borrowing costs, and the relative mix of employment/income losses, but it is clear that this strength is unlikely to last.

“A key reason is that while the lack of spring market has been an important factor behind the unseasonably strong summer, as of August, the level of sales activity is now in line with historic norms, suggesting that much of this pent up demand has been satisfied,” he continued, adding, “Indeed, assuming the level of sales remains flat at the current pace would make 2020 the strongest year on record for housing sales, despite weaker population growth and other headwinds. While Canadian housing markets have made a habit of mocking them in the past, the fundamentals augur for at least a partial retrenchment of sales activity over the remainder of the year.”