OTTAWA – Housing sales through its Multiple Listing Service (MLS) set another record in September 2020, with gains recorded both over the month of August and on a year-over-year basis, according to the latest figures from the Canadian Real Estate Association. While the national average price also grew, the number of new listings fell from the prior month.

The realtors’ group reported home sales rose 0.9% in September over August and 45.6% from the number sold in September 2019. Sales edged upwards on about 60% of local markets, including Ottawa, the Greater Vancouver Area (GVA), Vancouver Island, Calgary and Hamilton-Burlington. These were offset by declines in the Greater Toronto Area (GTA) and Montreal.

CREA also pointed out “activity in the two largest Canadian markets (the GVA and GTA) is still historically very strong” while noting the new September record had a margin of some 20,000 transactions over the previous high – “the equivalent of a normal month of September with an entire month of December tacked on.”

For the 2020 year-to-date, CREA said 402,578 homes have traded hands over the MLS, up 5.8% from the first nine months of 2019. Based on established norms, each of those transactions is expected to generate an average of $6,500 in furniture, mattress and appliance sales over the next three years. 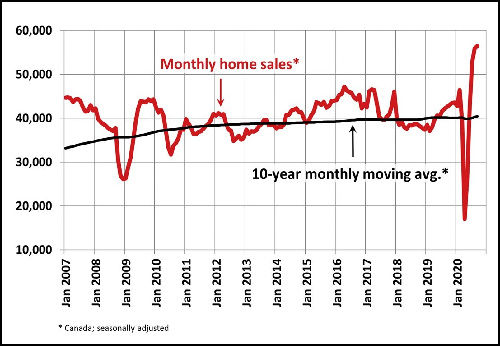 "This is starting to sound like a broken record (about records being broken), but Canadian home sales and prices set records once again in September amid record-tight overall market conditions, as they did in July and August,” CREA senior economist Shaun Cathcart said in a statement.

“Reasons have been cited for this – pent-up demand from the lockdowns, government support to date, ultra-low interest rates, and the composition of job losses to name a few,” he continued, “I would also remind everyone that sales were almost setting records and markets were almost this tight back in February so we were already close to where things are now, as far away from Goldilocks territory as we had ever been before.

“But I think another wildcard factor to consider, which has no historical precedent, is the value of one’s home during this time. Home has been our workplace, our kids' schools, the gym, the park and more,” Cathcart added. “Personal space is more important than ever.”

The number of newly listed homes fell back by 10.2% in September, reversing the surge to record levels seen in August. New supply was down in two-thirds of local markets, led by declines in both the GVA and GTA.

There were just 2.6 months of inventory on a national basis at the end of September 2020 – the lowest reading on record for this measure. At the local market level, a number of Ontario markets are now into weeks of inventory rather than months. Much of the province of Ontario is close to or under one month of inventory.

Excluding the GVA and GTA – the country’s largest and most active housing markets – the national average price falls by about $125,000.

In her research note, Rishi Sondhi of TD Economics, said the strength of the resale market in September was the result of a number of factors, including low borrowing costs, the relative mix of employment and incomes losses suffered because of the pandemic, and the release of pent-up demand.

“The question now becomes whether this momentum is sustainable,” she said, adding, “In our view, home sales are set to cool from their unsustainable third quarter pace over the next few quarters. Regarding prices, we think they’ll hold up at these record levels in the fourth quarter, a view given credence by the fact that markets were the tightest they’ve been in nearly 20 years in September. However, some easing is anticipated thereafter, reflecting intensifying affordability challenges.”