OTTAWA – Sales of existing homes via the Multiple Listing Service (MLS) fell for the second consecutive month in February while the national average price declines by 5%, according to the latest figures from the Canadian Real Estate Association (CREA). However, the number of homes listed for sale recovered by 8.1% in February over the prior month.

The realtors’ group said sales were down 6.5% in February from January and reached their lowest mark in the past five years. Sales fell on a month-over-month basis in almost three-quarters of all local housing markets, with large declines recorded in both the Greater Vancouver (GVA) and Greater Toronto (GTA) areas – the two largest and hottest real estate markets in the country.

Actual (not seasonally adjusted) sales were down 16.9% year-over-year and hit a five-year low for the month of February, while falling 7% below the ten-year average for the month. Sales were below year-ago levels in 80% of all local markets, including those nearby and within Ontario’s Greater Golden Horseshoe (GGH) region. 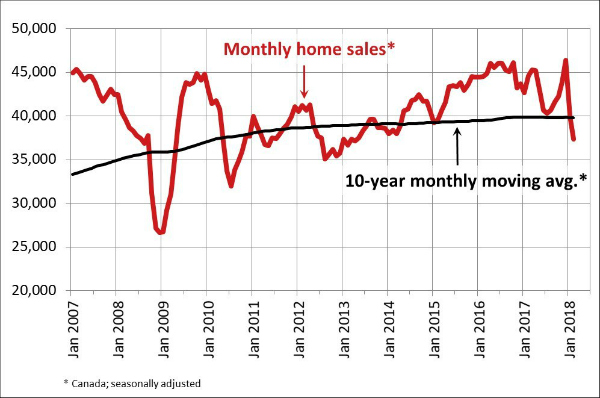 After plunging 20% in January, the number of newly listed homes recovered by 8.1% in February although they remained lower the levels recorded in every month last year except January, and came in 6.4% below the ten-year monthly average and 14.6% below the peak reached in December 2017.

New supply was up in about three-quarters of local markets, led by B.C.’s Lower Mainland, the GTA, Ottawa and Montreal. However, CREA noted these markets either remain balanced or continue to favour sellers.

With sales down and new listings up in February, the national sales-to-new listings ratio eased to 55% compared to 63.7% in January – within what the association considered the balanced range.

In his research note, Michael Dolega, director of TD Economics, said those buyers who rushed to buy before new mortgage regulations kicked-in are now out of the market and the overall existing housing market is faced with lingering uncertainty in the face of rising interest rates as well additional regulations that are being introduced in British Columbia.

However, there were some modestly encouraging details. “While sales did drop, the pace of decline eased considerably relative to January,” he said, adding the uptick in listings suggest rising confidence on the part of sellers now that the new rules are in place.

“All in, we expect policy-related turbulence and higher rates to negatively impact sales in the near-term, before some stabilisation in activity begins to take hold mid-year,” Dolega wrote. “We look for prices to drop, on average, this year, though balanced-market conditions across much of the country should mitigate the magnitude of the decline. We expect conditions to improve next year, with price growth returning to the market alongside a rise in transaction activity.”