OTTAWA – In not unsurprising news, the Canadian Real Estate Association (CREA) has reported sales through its Multiple Listing Service (MLS) rose a 63% in June 2020 on a month-over-month basis and climbed 15.2% over the same month last year. The number of new listing were also up 49.5% from May as the actual national average price posted a 6.5% climb year-over-year.

The realtors’ group also said sales returned to their normal levels for the month of June and were 150% higher than they were in April, when stay-at-home orders were in greatest effect across the country. 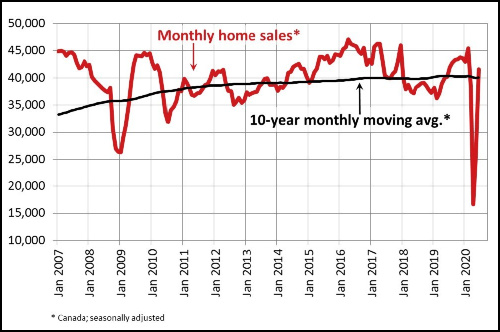 “While June’s housing numbers were mostly back at normal levels, we are obviously not back to normal at this point,” CREA senior economist Shaun Cathcart said in a statement. “I guess the bigger picture is one of cautious optimism. The market has recovered much faster than many would have thought, but what happens later this year remains a big question mark. That said, daily tracking suggests that July, at least, will be even stronger.”

The number of new listings of homes for sale climbed by another 49.5% in June compared to May. As with sales, gains were recorded across the country. However, there were only 3.6 months of inventory at the end of June – a 16-year low for this measure, which shows how long it would take to liquidate current inventories at the current rate of sales.

Excluding the GTA and the GVA – this country’s largest and most expensive housing markets – cuts more than $107,000 from the national average price.

In her note, Rishi Sondhi of TD Economics said June’s performance was driven by pent-up demand, as would-be house hunters were likely to have suffered less on the job front.

This brought sales nearly back to where they were in February and prices seem to be returning to pre-pandemic levels.

It's also worth noting that prices have been propped up by tight supply conditions,” Sondhi said. “On this point, recall that heading into the pandemic, active listings were on a downtrend and completion rates for new units under construction were dropping.”

CREA’s report suggests the housing market will remain strong as the economy moves into the second half of the year, but she urged caution. “While third quarter sales growth is likely to be very strong, what takes place in the few quarters thereafter is a major risk point, as mortgage deferral programs and the CERB are set to conclude in the fourth quarter.

“In our view,” she continued, “as long as unemployment is elevated, population growth slows and CMHC measures remain in place growth in home sales and prices is likely to be subdued after this initial burst.”