COLDBROOK, Nova Scotia – Leon’s Furniture Limited (LFL) has returned to this rural community near the shores of the Bay of Fundy with its second ‘smart’ store featuring state-of-the-art retail technology and a curated assortment selected from its deep catalogue of furniture, mattresses, appliances and electronics.

The 20,000 square foot store – located at 128 Coldbrook Village Park Drive – operated as a franchise until early this year when its ownership declared bankruptcy. It also owned and operated a second franchise in Bridgewater, Nova Scotia which also closed. A spokesman for Leon’s said there are no plans to re-open that store. 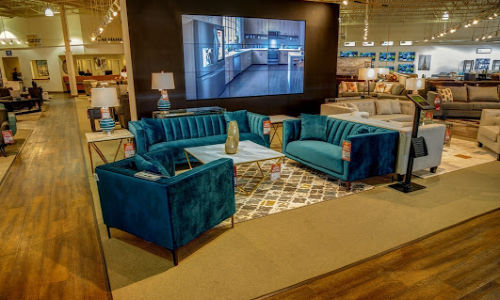 Coldbrook is now a corporate store. The grand opening was scheduled for 02 October.

“We look forward to being back in Coldbrook and are excited to share this new smart-store concept with the community,” Mike Walsh, president of the publicly held retailer’s Leon’s division, said in a statement. “Leon’s is always striving to further enhance the shopping experience and improve customer service and this new location’s in-store activations and technologies will do just that.

“The Leon’s Coldbrook store closing was unfortunate,” he continued, adding, “It was important for us to be here in Coldbrook and equally important to us that this community benefit from the high customer service levels that Canadians have come to expect from Leon’s. To that end, the new store will honour the warranty of items purchased under the previous management to ensure our customers continue to receive a high level of customer service.”

Leon’s new ‘smart store’ concept includes an 11-foot video wall that allows the customer to view any piece of furniture from its inventory in real size, providing a new way for her to interact with product not on display in the showroom. Touchscreens can be found throughout the store enabling shoppers to browse the Leon’s assortment with easily. 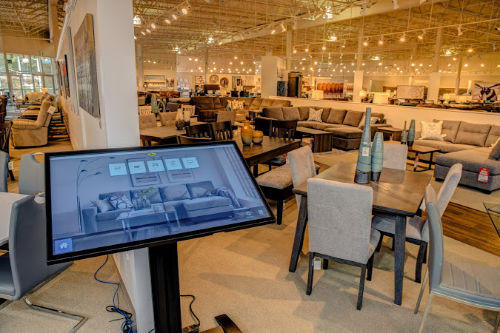 Customers can also view appliance prices on e-tags, which can be updated quickly enabling the retailer to offer the most competitive price available, along with its 60-Day Price Guarantee. Additionally, using augmented reality (AR), sales associates can show customers a product alongside other pieces in the showroom to help with room planning.

Leon’s opened its first ‘smart store’ in Coquitlam, British Columbia, in early August. A company spokesman told Home Goods Online much of the technology used in that store were also used in Coldbrook.

“Since we took over the previous location only small renovations were required,” he noted, adding, “The biggest renovation was to incorporate some of the technology such as the 11-foot video wall, touch screens and digital price tags for our appliance department.”

While the company is excited about the new ‘smart store’ concept, there are no immediate plans to open a third. “We are actively looking at a number of markets, especially in B.C.,” the spokesman told HGO. “The ‘smart store’ is a ‘proof of concept store’ and we will monitor results from these two stores before determining what locations to fit with this new technology.”

In all, LFL has 11 stores flying the Leon’s banner in Atlantic Canada and is represented in each of the region’s four provinces. The banner now includes 52 corporate stores and 34 franchise locations across the country. LFL’s other furniture banner – The Brick – recently opened its new flagship store in the West Edmonton Mall.