TORONTO – Leon’s Furniture, one of the two full-line furniture banners operated by the publicly held Leon’s Furniture Limited (LFL), has partnered with the Toronto Raptors of the National Basketball Association (NBA) in a promotion that will see 100 of its customers win an exclusive limited-edition coffee table.

In a statement, the retailer said each one-of-a-kind coffee table is made from a piece of the of the Raptors’ 25th anniversary ‘95 Rewind Court’ on which it played during the 2019-2020 NBA season at this city’s Scotiabank Arena.

“We are so inspired by the Toronto Raptors’ 25 years of passion, perseverance, and triumph,” Graeme Leon, divisional president of the Leon’s Furniture banner, said in a statement. “As a Canadian company based in Toronto, we want to celebrate our home team and are excited to give fans a chance to own a piece of history with this commemorative coffee table.” 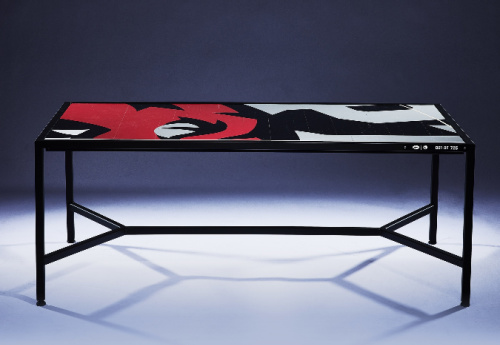 Beginning today (February 8, 2021) and until March 31, fans can enter to win one of these exclusive coffee tables by visiting leons.ca/raptors and completing the online form. There will be a total of 100 coffee tables to be won. Winners will be selected via random draw on April 6 and notified by e-mail. Full giveaway rules can be found on the giveaway web page.

“Leon’s was the perfect partner to help create this special souvenir from the Toronto Raptors' commemorative 25th anniversary season,” said Galen Davies, senior director of global partnerships for Maple Leaf Sports & Entertainment (MLSE), the owners of the Raptors. “Although we aren’t able to cheer on the team together at Scotiabank Arena right now, we hope the lucky winners are inspired to cheer even louder for Canada’s team while gathered around this piece of franchise history.”

Each 27.75-inch by 48.125-inch by 18-inch coffee table is finished with a sleek, modern matte black frame and comes with a certificate of authenticity, a numbered plaque, and a court map, identifying where on the court the tabletop wood was located. There may be gameday scuffs and marks on some tabletops, adding to the authentic aspect of these coffee tables.

The retailer said a total of 725 of the limited editions will be made for them by Blue Shell Construction, a kitchen millwork specialist and Elias Custom Metal Fabrication, both located in Toronto. While 100 will be given away as part of the promotion, the company didn’t say what will be done with the remaining 625 although they won’t be added to Leon’s regular product assortment.

In announcing the give-away, the retailer said “Each coffee table will bring a special piece of Raptors basketball action into the winners’ homes. The Toronto Raptors played on this court against the Orlando Magic, Los Angeles Clippers, Atlanta Hawks and Milwaukee Bucks during the season.”

Leon’s signed on as the official furniture and mattress retailer to the Toronto Raptors at the beginning of the 2019 season following the team winning the NBA championship.